Over the River and Through the Woods

Today my host sisters, Deborá and Fernanda, took me to the Piracicaba River. Although we were walking along a rocky, muddy river instead of the saltwater Puget Sound, the walk reminded me of Seattle’s waterfront.

We used a new pedestrian bridge and explored the Engenho Central (Central Mill), a derelict brick sugar mill which used to be the center of Piracicaba’s industry.

We stopped at a small art shop in a renovated part of the mill. Deborá told me about a local artist who used to make lifesize rag dolls and leave them all along the river as public art. Since my dad just had his birthday and my mom is about to have hers, I took a photo of myself with a funky lifesize ragdoll for my mom and with an engineers’ memorial statue for my dad. 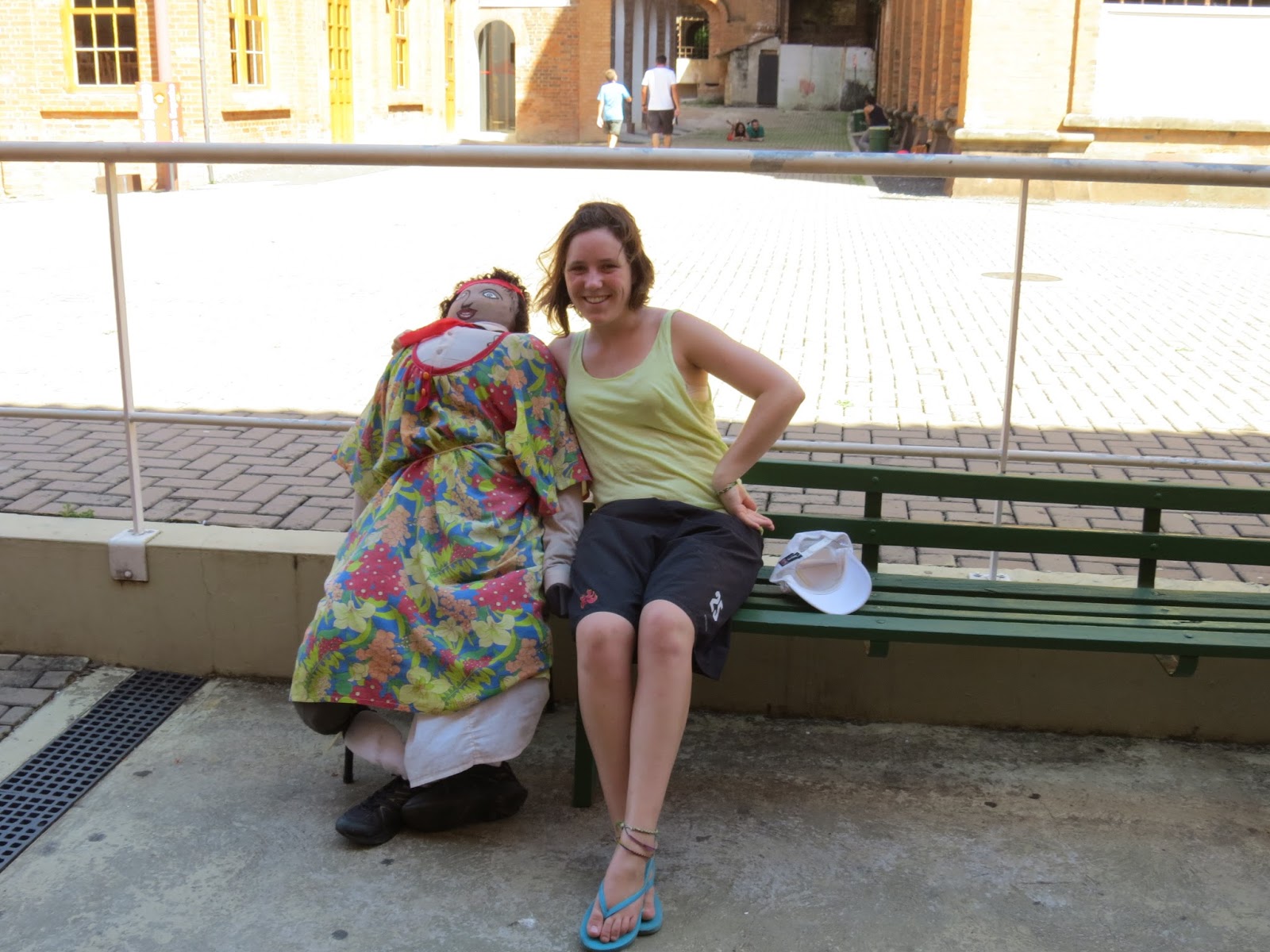 As we walked along the river, we stumbled upon a new free aquarium with displays of fish from the world, South America, and the Piracicaba River.

We found some interesting wildlife along the actual river, too.

For lunch, we headed next door for a cousin’s birthday party. I ate good food, nodded along to the grandpa’s Portuguese stories, and started to nod off during the post-meal chatter. Deborá found me a mattress and a fan in a spare room and I took an hour-long nap. Geez, I have never slept this much in my life!

During the party, it had come to Deborá’s attention that I had never tried pasteis, the Brazilian version of the empanada. So for dinner, Deborá and her friend took me to the mall for window-shopping and pasteis. I ate a delicious fried bread pocket stuffed with ground beef. We spent a couple hours wandering around and teaching each other vocabulary. It took a while for me to explain the word “preppy,” but once I started pointing out boys in pink polos, I think the message got across.

All too soon, it was time to head back to Hotel Antonio to meet up with the AZP group. I promised Deborá we would meet up later in the week for a movie or dancing, but I don’t know if we will have time. The AZP group met for a reflection on the homestays, and it sounded like everyone had a great time. We were supposed to mention two activities we did, but pretty soon everyone was recounting their entire weekends. I didn’t mind – it was fun to hear how everyone’s experiences were different, and I wished I could have stayed with each family for a weekend!

This homestay experience was different from my Ecuadorian one because of the length of the stay. In Ecuador, I was just another member of the family. My host parents went to work, my host siblings went to school, and we joined up for dinners and weekend sporting events. In Brazil, I felt like I had a personal tour guide for a weekend. I was the center of attention, which was both fun and exhausting. If the AZP program’s structure is ever remodeled in the future, I think an extended homestay would be incredibly valuable. Transportation to school and personal safety would need to be priorities, but from my experience last semester, I know it could work.

Today we had our second day of classes with Shirota. The discussion shifted toward natural resources. One example Shirota brought up was the fishing industry in Washington State. I was already trying to put the natural resource management equations we had learned into the context of Pacific Northwest fisheries, so it was an interesting topic. I have always been interested in a career in marine biology, but fisheries science seemed too common and boring. After today’s discussion, I am curious to look into the topic further.

For lunch, Sejal, Alexis and I joined Juliana and Nicole (a super friendly Brazilian economics student) for a sushi lunch. It was AMAZING! For R$30 (about $15 American dollars) we got an all-you-can-eat sushi lunch. We started with a huge plate of all salmon-themed roles and nigiri, followed by pot-stickers, sautéed mushrooms, and dumplings. What a deal!

Time is running short before the exam, especially for me because I’m also trying to finish my Hollings Scholarship application, so Sejal and I decided we would bring home leftovers from lunch for dinner. That plan obviously would not work with raw fish, so we revised our plan and headed to the grocery store after class. It was hard to navigate the grocery shopping since we don’t have any way to cook food in our hotel rooms. We ended up buying two cans of tuna, a loaf of bread, a pack of stale-bread crackers, a block of cheese, two packs of cherry tomatoes, a carton of mango juice, a miniature jar of mayonnaise, a pack of sliced deli turkey, two Tupperware containers, and two packs of pão de queijo mix to bring home to our families.

Tonight I mixed up tuna salad and ate it wish cherry tomatoes. It was delicious! When I was studying in Ecuador, I never wanted to make food from the grocery store because I loved trying the local, cheap, family restaurants for every meal. Here the situation is different because there aren’t the same type of authentic family restaurants around. We eat our meals at the same semi-expensive bars and sushi restaurants around the neighborhood, so I’m excited to try “cooking” my own food for a while.

We began the morning with a welcome break from note-taking and economics. Shirota went over our itinerary for the “long trip,” our ten-day adventure to the southwest of São Paulo. I won’t go over the whole plan here, but the most exciting points which stood out to me were the forested island and Foz do Iguaçu, an enormous system of waterfalls at the junction between Brazil, Paraguay, and Argentina.

Then, we took time to organize our questions for the panel of our professors who would be coming in that afternoon to talk about the upcoming essay exam. It was clear that nobody had studied too much yet, because we couldn’t come up with many questions. The panel used to be scheduled for the two hours immediately before the exam. Even though moving the panel up by two days meant we were quite as prepared, I appreciate the switch because now we will have two days to focus our studying on the points which the professors emphasized.

I packed cheese and stale-bread crackers for lunch. It was simple but filling, and it gave my time to work on my Hollings application during lunch which was very nice.

The panel discussion was a little confused. Professor Mello showed up two hours early, and Professor Caron couldn’t make it at all. Overall, I found the panel very helpful. I feel better about studying now because I have a feeling for what the professors are looking for.

After class, I was feeling so good about the exam that I decided to do laundey and work out instead of study. Sejal, Gabby and I did a 45-minute Insanity workout video which was rough! Afterwards I still had energy to burn, so I ran on the treadmill to three songs. I love my new technique of silently belting out songs to myself in the mirror as I run on the treadmill. It might be a little embarrassing in a crowded gym, but that could be half the fun!

For dinner, a group of us went out to the Giant Hamburger Sandwich Place. I wanted something light, so I ordered a lanche, a lunch snack plate. It was not light! I should have guessed from the size of the restaurant’s massive hamburgers. The waiter brought a platter stacked with chopped and pickled heart-of-palm, grated carrots, shredded chicken, TONS of fresh cheese which tasted like blue cheese, a couple leaves of lettuce, and a pile of corn. I couldn’t finish half the food, but what I did eat was just the kind of meal I was looking for. You never know what you’re going to get when you order in Portuguese!

Today we took a much-needed break from class and went on a field trip to the ESALQ forestry research station. The bus ride was interesting – I woke up as we tried to maneuver the huge charter bus under a low concrete bridge. We heard loud scraping and had to reverse out from under the bridge. I looked around at the neighborhood we were in: a rural town of colorful concrete houses with chickens pecking in the streets and clothes-lines strung between tropical trees in the yards. It was just the sort of place I pictured as “Brazilian,” and the kind of place I think it would have been really amazing to spend time in.

The forestry station tour started out a little rough, with a long PowerPoint presentation in a very hot room. The day got much better after we ate our sack-lunches, as we hiked several miles through the station’s natural vegetation and eucalyptus plantations. The guide advised us that if we were quiet, we might be able to see amazing forest animals like foxes and birds. I guess we were a little loud, because we didn’t see a single bird in the woods!

This evening, I finally got serious about studying for tomorrow’s essay exam. I went through each professor’s notes out-loud with Sejal for several hours. It was a surprisingly productive study session! I had to leave the last two professors’ notes for tomorrow so I could go to bed at a reasonable hour. Hopefully I’ll have time to finish studying at lunch. Can’t wait to get this exam over with!