This morning we packed up all the things that had spread out across our hotel room during our extended three-night stay. We stopped at two government-run research stations, IAPAR and Embrapa.

IAPAR (Instituto Agronomico de Parana) is a state-based (rather than federal) agricultural research agency. Instead of focusing on one commodity or type of farming, IAPAR works to develop sustainable farming techniques across the board. They were working on genetically modified strains of soybeans, biological pest control, shade-grown coffee techniques, and no-till farming, to name a few. We took a tractor ride around the research farm. The coolest part was watching latex drip from tapped rubber trees. Whoever discovered that?

In the afternoon we headed to Embrapa Soja, the soybean version of the federal agricultural research agency we visited a few days ago. (Earlier we visited the swine and poultry Embrapa.) We were joined by a group of older Canadian farmers who are also on an agricultural tour of Brazil. The Canadians’ attitudes and questions made me realize that I would have a very different perspective on this trip if I was of a different age.

We didn’t get to tour any of the Embrapa facilities, but the presentation raised some interesting points. One thing I find interesting if the Brazilian land conservation law which requires farmers in the cerrado biome to maintain at least 20% of their farmland in natural forest vegetation. (This requirement varies by biome, with Amazon land requiring a full 80% to be naturally forested.) Embrapa explained that since their research farm was already deforested, they were allowed to reforest the correct area of land 50 kilometers away from the property, as long as it was within the same biome.

This loophole made me think: wouldn’t it be better if every farmer were required to purchase and preserve an area of forest that equaled 20% of his farmland offsite, in a centralized location with other forest preserves? When we drive past farmland, I can look out the window of the bus and see the small, fragmented patches of forest dispersed among hectares of soybean and corn. These patches are a nice visual touch to the landscape, and I’m sure they house some wildlife, like frogs and birds. But they aren’t helping large mammals or raptors which require large ranges, and all the species they hold except birds are genetically isolated. So, I asked, why is the current law the way it is? Do these parcels help local water, soil, and air quality? Or was it simply too difficult to legislate and enforce offsite conservation zones?

I’ve found that I focus better when I’m doodling, so I drew a portrait of our presenter while taking notes. 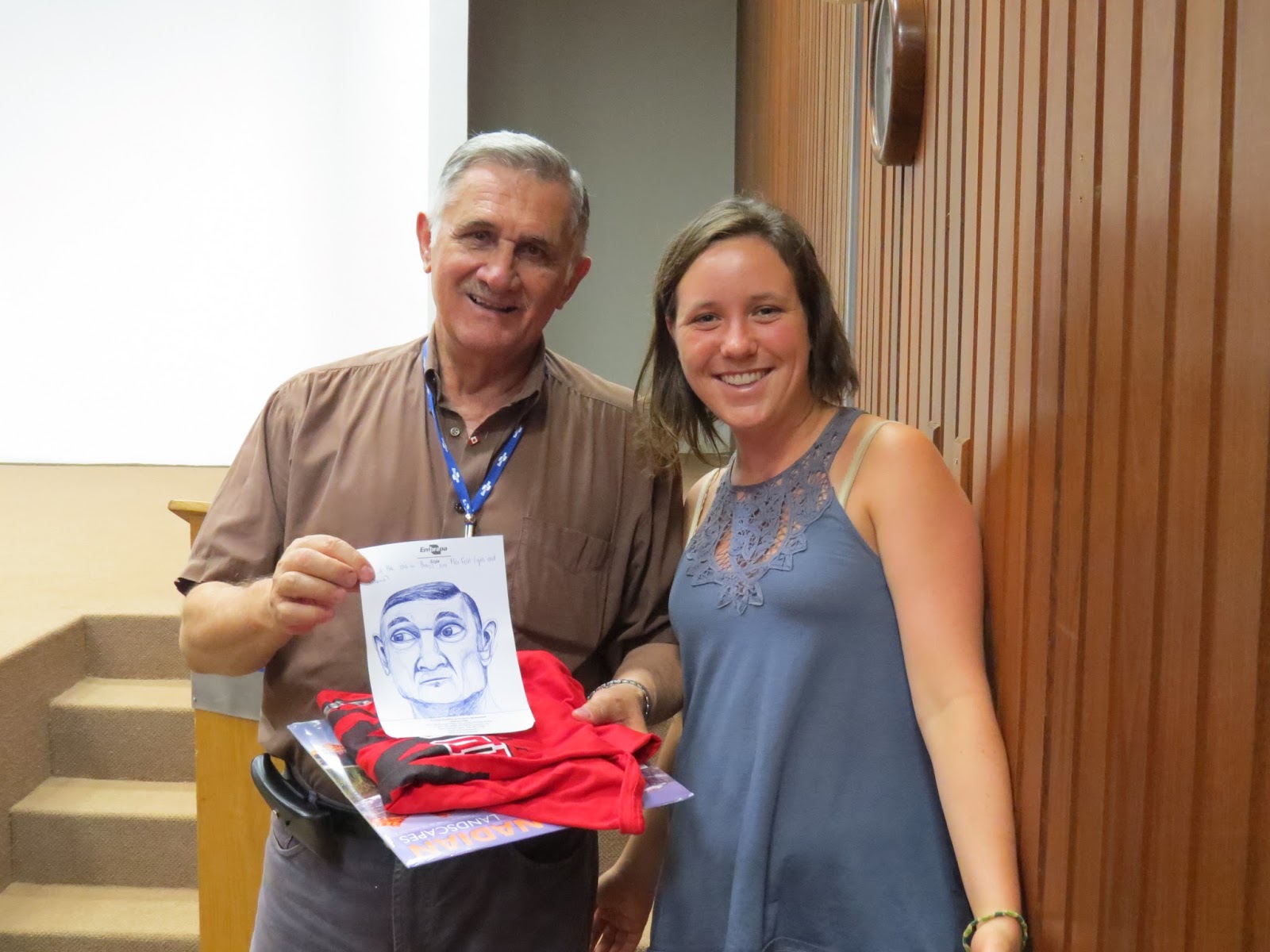 Tonight we checked into a hotel with a tropical paradise pool. After a cheap, filling truckstop dinner of rice, beans, chicken, and a fried egg, we all headed to the pool for frisbee and drinks. I found two massive cane toads as a bonus!

Today we rode the bus home! Well, at least to Piracicaba, our home in Brazil.

We spent the morning at Zilor: Energy and Food, a sugar growing and processing company. We sat through some interesting (if slightly too-detailed) presentations, and then we got our wish. We frolicked through a sugar cane field! We chewed the sweet, fibrous cane fresh from the field, and waged sugar-cane battles. We galloped over the rows of straw and hid in the razor-sharp leaves. I had a sneezing attack (sugar cane is definitely in the grass family!) and took a photo with a working sugar-cane harvester. What fun! 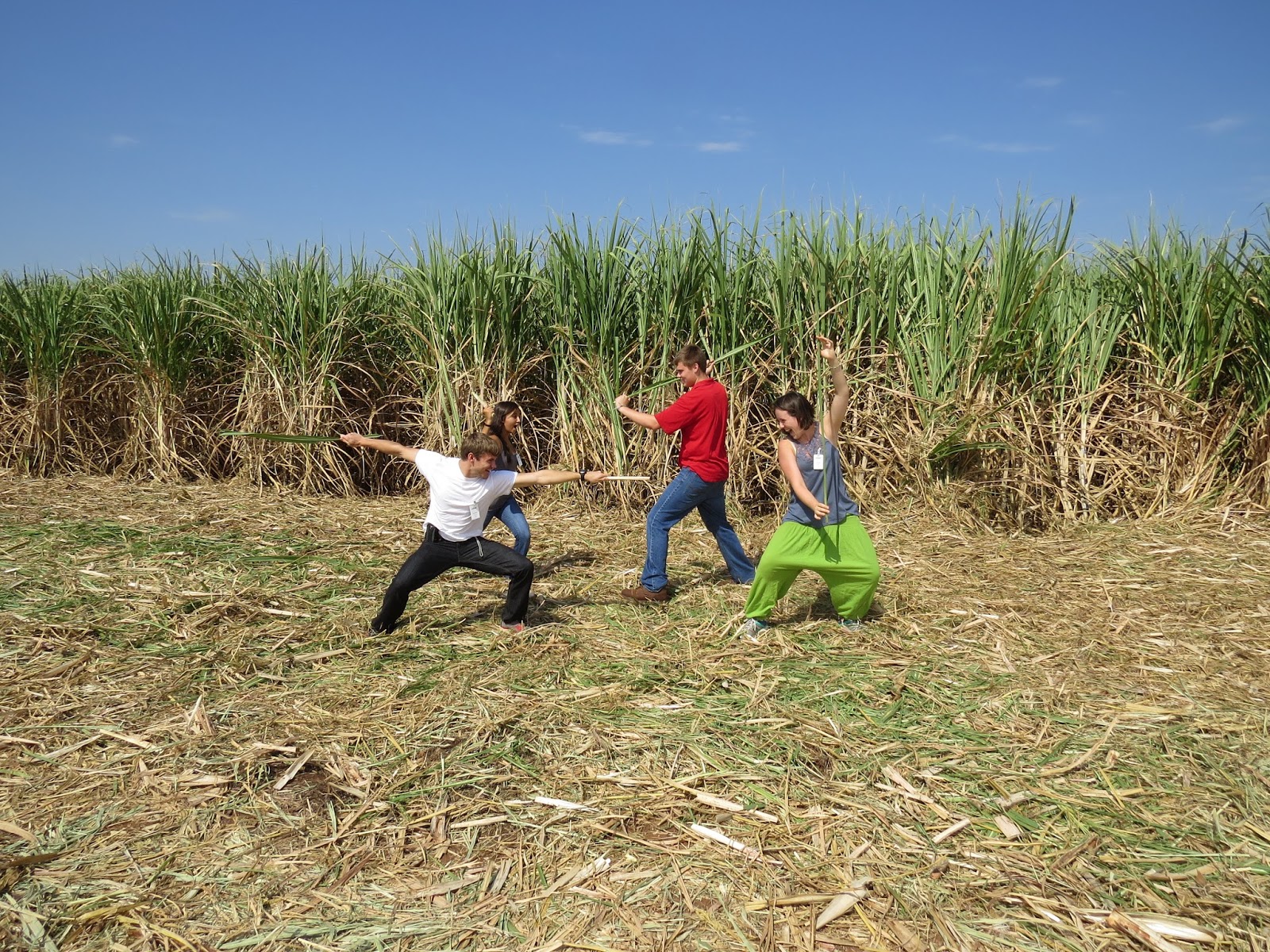 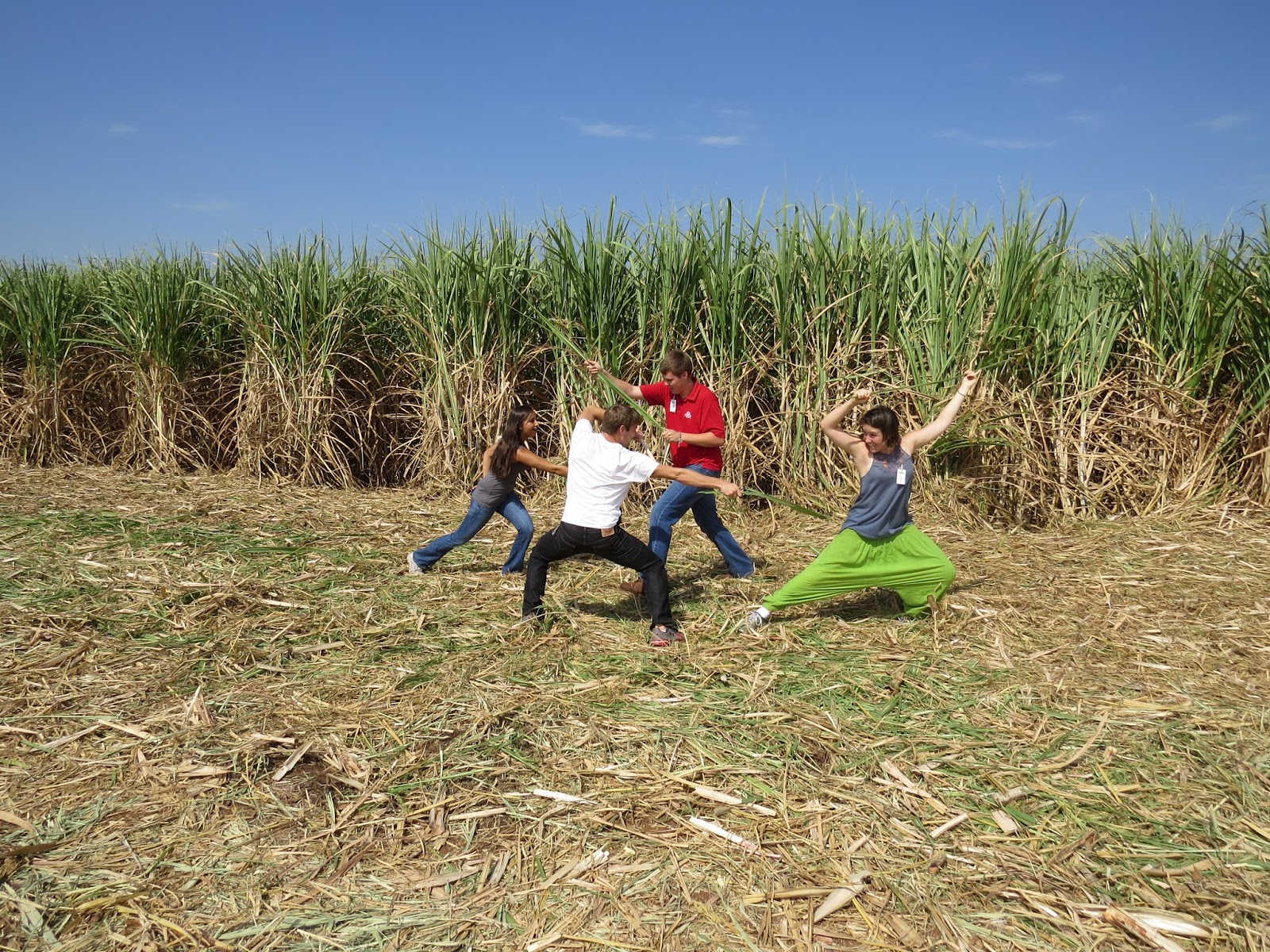 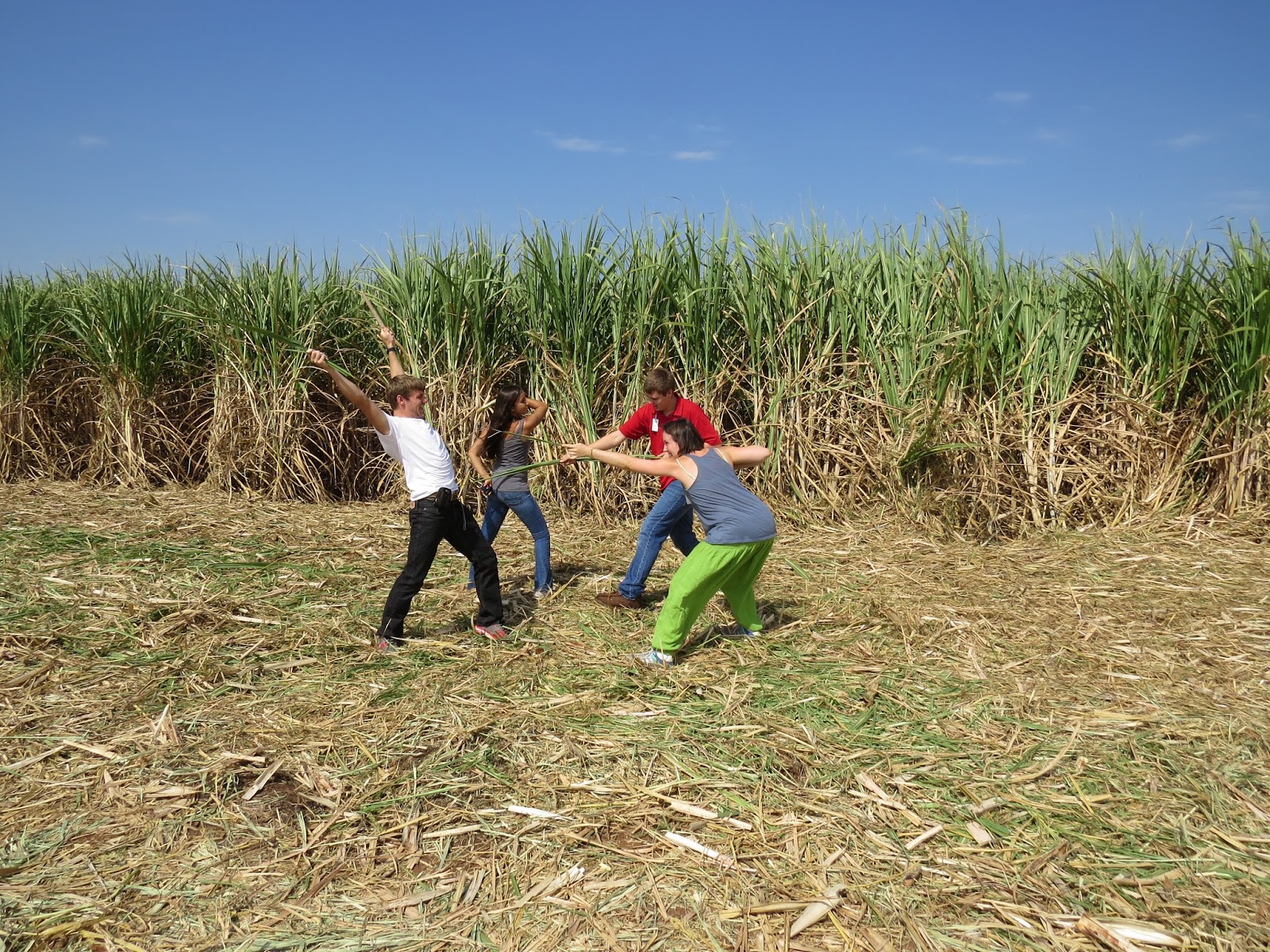 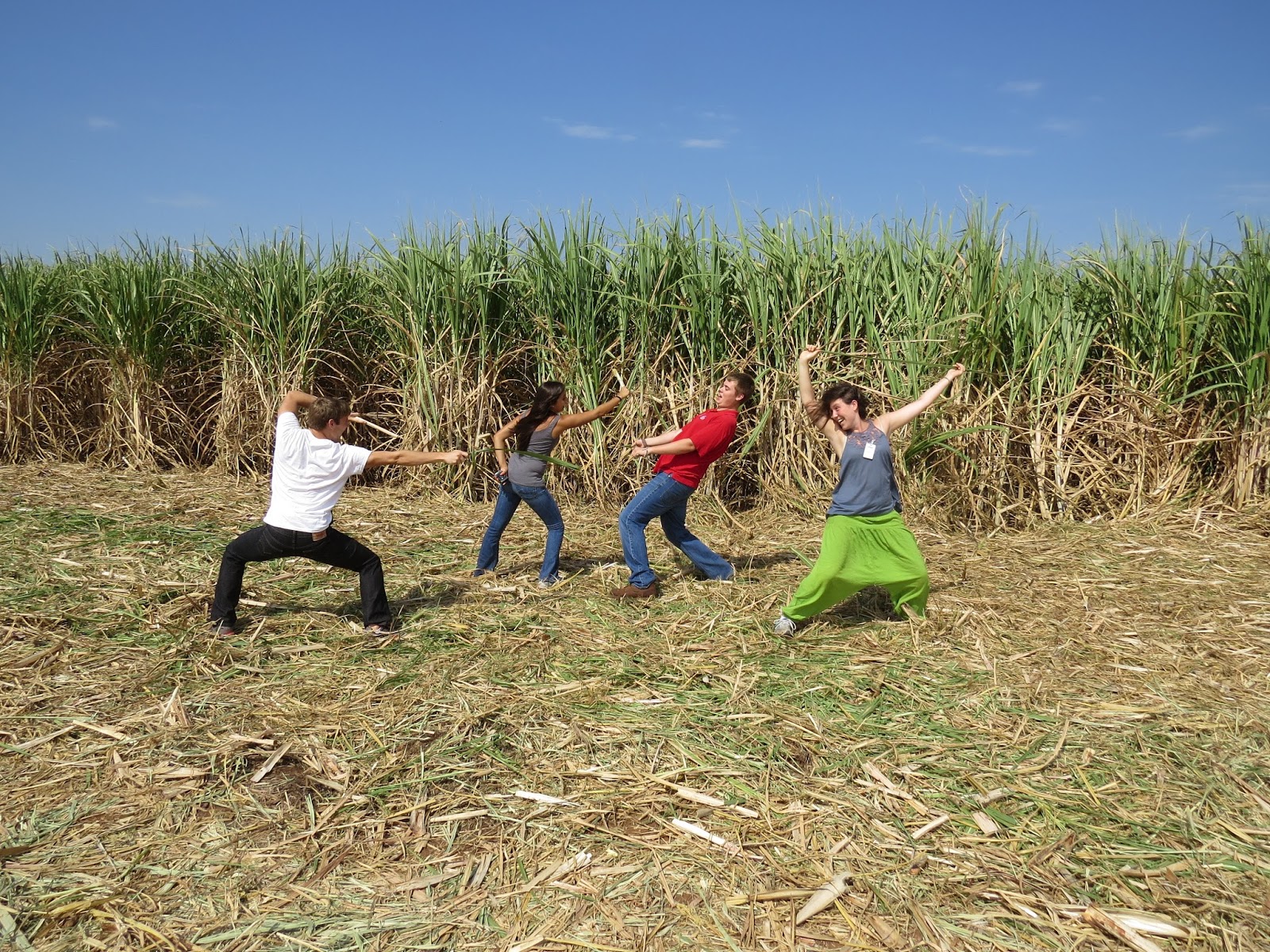 Unfortunately, we couldn’t tour the inside of the processing plant since it’s currently the off-season, but we did take a bus tour. I was stunned by the massive equipment.


The bus ride back to Piracicaba was long, as expected, but it was so much more pleasant than our overnight slog ten days ago. I dozed, listened to music, and managed to read a few chapters of Stephen King’s Different Seasons without getting too carsick. Everyone was running out of books to read, so we all swapped. I loved watching people get into their books. As a book lover myself, I always feel happy watching others read. It’s amazing what can happen when laptop batteries die!

Today can be described in one word: project. Although my group worked hard on our proposals and discussed our outline on the long trip, there just wasn’t time before today to get serious work done. So today, we got down to business!

We were glad that the morning class was just a study session, so we could get solidify our outline. For lunch, Erin and I walked to the cafeteria where I discovered my new favorite meal: buttery brown rice, cooked vegetables, and grilled chicken followed by a cup of frozen acai, banana slices, and strawberries.


In the afternoon, we worked at school until 6pm, when we stopped at Subway. They didn’t have flat bread, so I got a tangy combination of bacon, cheddar cheese, red wine vinegar, raw onions, and arugula on honey wheat bread. Then we sat in the hotel lobby and worked on our project until 1 in the morning, with just one break for frozen yogurt.

As we ran through the project and timed ourselves in the wee hours of the morning, I wished we had started this project earlier! But looking back, I knew we hadn’t had time. When I tried to work on the bus, I felt nauseated within minutes; we arrived late at night at several of our hotels; and the few hotels where we did have free time did not have reliable internet. So I just took the situation as an uncontrollable, to quote my ultimate frisbee coach, and made the best of the situation. We will meet tomorrow morning at 6am for a couple final run-throughs.

Presentations day! I got up after four hours of sleep for a very early breakfast (apparently a little too early – although all the food was already laid out, a hotel worker let me know the breakfast was not open yet – my bad.) We ran through the PowerPoint a couple times, and like every last-minute group project, the presentation seemed to magically improve at the last minute to something better than respectable.

We watched three presentations and gave ours fourth. I most enjoyed the first presentation, which was about ethanol and the food vs. fuel debate. The presenters were great public speakers, and I’m very interested in biofuels. One thing I noticed during the presentation was the two members used the word “believe” and all three used the word “faith.” For example, one girl explained that whether you side with food (against ethanol) or fuel (for ethanol) depends on what you believe, since there is research supporting both sides. Later, another group member said he thinks ethanol will someday replace gasoline completely because he has faith in technology. I was a little disturbed by these statements, because I have been taught the “belief” and “faith” often denote a wish somebody has which is not entirely logically sound.

In the food vs. fuel debate, a person should still come to a conclusion based on the data. Just because there are scientists on both sides of the debate does not mean that a person can simply choose the side she likes more. In time, as more research is conducted and real-world consequences are observed, people will change their minds. One’s opinion should not be based on faith.

I was surprised when Shirota’s first question to the presenters focused on this exact detail, the use of the words “believe” and “faith” when discussing a scientific debate. Shirota, never one to hide his opinions, mentioned that this American habit of choosing what to believe when there is a sound scientific answer is a disgrace to the United States and to humanity. His examples included teaching intelligent design in schools and choosing not to get vaccinated. I know Shirota pissed off a lot of people in that class, but I was heartened by his logic and his candidness.

For lunch, I went to the cafeteria with Erin and repeated my New Favorite Meal. We watched the last few presentations. I just took a hot shower to untie the knots in my shoulders. In an hour I’ll go to the Farewell Dinner with my host sisters. It will be great to see them but sad to say goodbye! I can’t believe how soon we are leaving Brazil. It’s even harder to comprehend because even though I’m done with the presentation, my mind is not free. I have three internship applications due tomorrow, the day after, and three days after that! By then, I will be in Ecuador.

All I can say is that this adventure is far from over.