When the Last Frisbee Hits the Turf

Hello from San Diego. It's been more than a year since I posted here, so bear with me as I shake off the cobwebs...

First, logistics: I'm sorting out a new way for readers to subscribe to this blog, so if you get two email notifications, my apologies and don't panic! I'm working on it!

So, what am I doing in San Diego? Recovering -- physically, emotionally, spiritually -- from the USA National Club Ultimate Championships. 2022 marks my seventeenth year playing ultimate frisbee, and my first US Club Regionals and Nationals. I could not have gotten luckier, moving to Brooklyn and joining the mixed-gender team New York XIST. 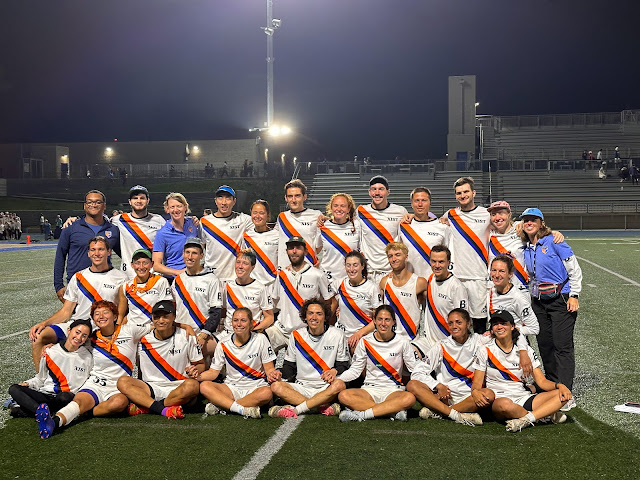 If you're so inclined, you can watch us play in the quarterfinals against Atlanta Dirty Bird here on Ultiworld, and in the semifinals against Seattle Mixtape here on the big screen of ESPN. (Sorry, they both need paid subscriptions.)

Maybe I'll post more reflections on the joy and heartbreak of giving everything to a championship run with this team later. For now, I'm remembering that life exists outside of ultimate, little by little, by spending a few days with family friends and multispecies companions in the Southwest. 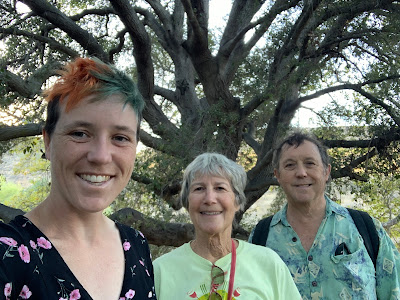 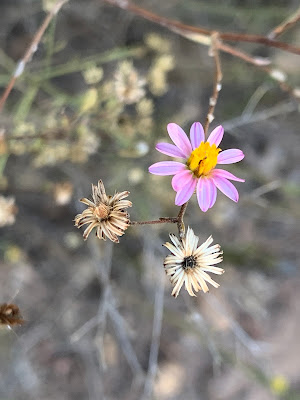 A native Corethrogyne aster drops a jewel of color into the dry landscape. 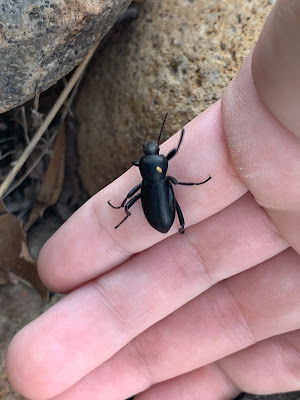 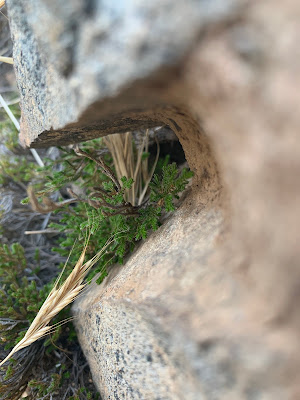 I had to double back and scramble up some rocks when I caught a glimpse of this emerald green Bigelow's spikemoss (Selaginella bigelovii) making its living in the shade. If you think ferns and mosses are cool... wait til you start noticing these fern allies all around you. 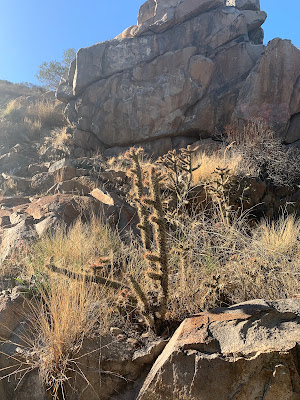 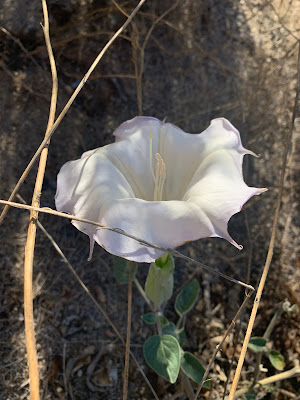 A sacred datura (Datura wrightii), one of several flower species known as Devil's trumpets.
Sacred datura is a psychoactive, hallucinogenic, poisonous plant -- technically, an anticholinergic deliriant. I'm reminded of the spring day last year when I walked through a Norfolk meadow in the peak of grass pollen season and got so allergic I could barely breathe or see through all my snotty sneezing. Two Claritins and a Benadryl later, I was lying on the floor, hot, red, and batty as hell. Naturally, I called my mother, who diagnosed an "anticholinergic storm" from too many antihistamines... I wonder if eating a sacred datura would do the same? I will not be tasting one to find out. 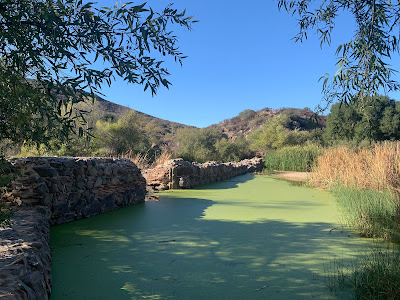 The duckweed-filled pond of Old Mission Dam and Flume, built from 1813 to 1816 to provide water for crops and livestock at the Mission San Diego de Alcala.
The signage mentioned "Indian laborers" and the use of "human hands" under "Franciscan missionary supervision" to build the dam.
One sign said, "In the early 1800's, the Spanish saw the need to control the flow of water to provide it year-round for their permanent settlements. To solve this problem, engineers trained in Mexico supervised Kumeyaay Indian laborers in building one of the first major irrigation projects in the western United States."
No mention of the fact that permanent settlements were an act of genocide on stolen land.
No mention that the "Indian laborers" were likely working under conditions akin to slavery.
No mention that the Kumeyaay lived here and stewarded these lands and waters for 600 generations -- 12,000 years -- without needing to dam the rivers.
No mention that the Kumeyaay continue to live here.
No mention that major irrigation projects in the western United States have become one of the greatest environmental and human rights disasters (see: Colorado River). 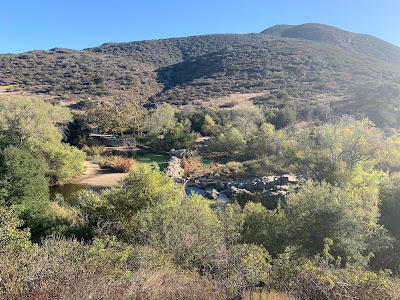 Old Mission Dam from a lookout point above.
Hiking through the desert broom and Fremont cottonwoods and western sycamores of this valley, I was reminded that environmental justice and social justice are deeply linked.
Last year, I was honored to join an excellent virtual seminar (free for community members!) at Syracuse University called Climates of Resistance, led by Dr. Becca Farnum, about environmental inequalities and the active resistance of Black and Indigenous People and People of Color. If Becca is able to run the class again, I highly recommend it. I will never again see the oppression -- or liberation -- of lands, waters, and people as disconnected. 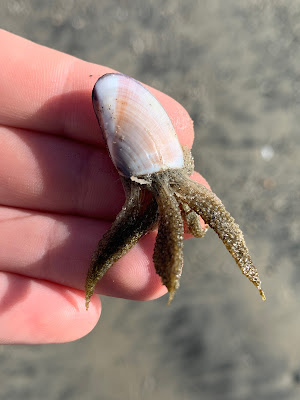 My favorite find of the week: a Gould beanclam (Donax gouldii) and, attached to its asymmetrical shell, a bean clam hydroid (Eucheilota bakeri).
There were thousands upon thousands of these little beanclams exposed on the low-tide sand, each one with a symbiotic specialist hydroid attached!
Hydroids are cnidarians, in the same phylum as jellyfish and sea anemones. Like their jelly cousins, they are predators that hunt microscopic plankton prey using stinging harpoon cells called nematocysts. Apparently, the nematocysts of bean clam hydroids aren't big enough to sting through human finger skin because I touched a lot of them today and didn't feel a thing.
When the Gould bean clams were buried under the sand, their hydroid hitchhikers were aboveground, waving in the cold salty water as it washed over them in the rising tide. It's obvious what the hydroid gets out of the bargain -- a hard substrate to attach to and feed from. What does the bean clam have to gain? Maybe the rough, stinging hydroid makes the clams less appetizing to predators? Or maybe the hydroid is a parasite, taking without giving in return? 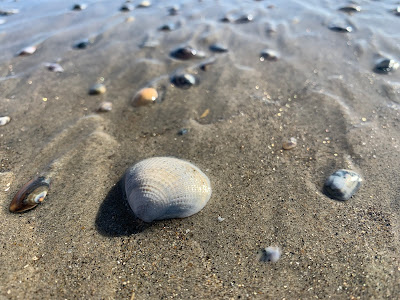 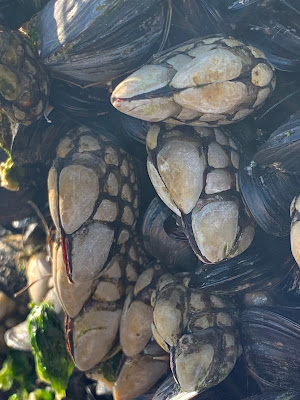 A very low tide exposing a rusting naval base boundary fence made for a great opportunity to see gooseneck barnacles (Pollicipes polymerus). Fun fact: I wrote the Wikipedia page for this species when  I was in high school... 🤓 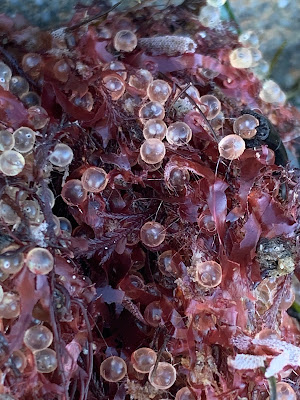 I have literally no idea what these translucent tiny magenta spheres are, and I love that. 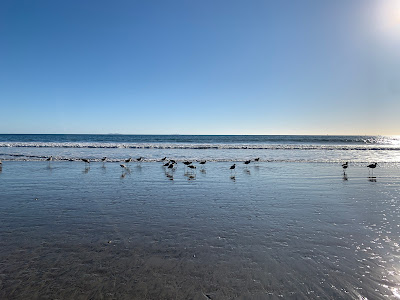 A flock of marbled godwits and willets probe the wet Pacific sand. 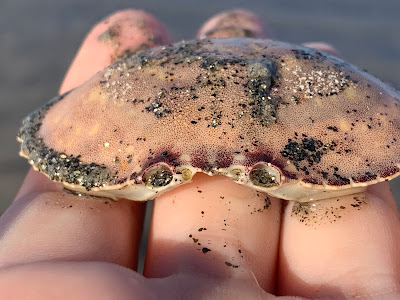 The carapace of a graceful rock crab (Metacarcinus gracilis). Whoever named this species was having a more generous day than the guy who named two other beach finds: 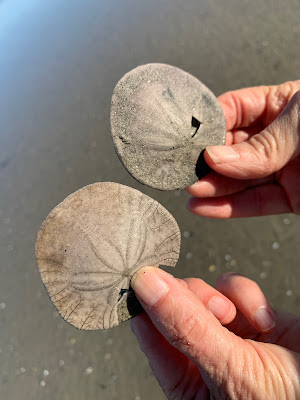 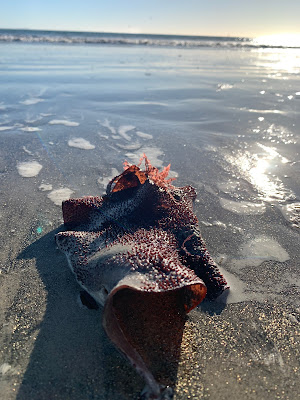 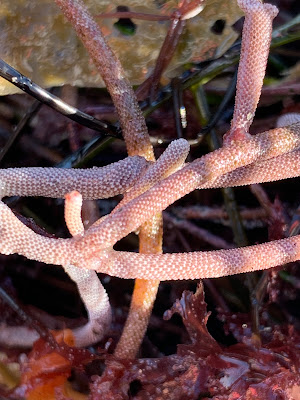 A final favorite of the day, a tenacious bryozoan known as Sargassum sea mat
(Jellyella tuberculata). If I have a kid, I'll be damned if I'm not naming her Jellyella.
🕊 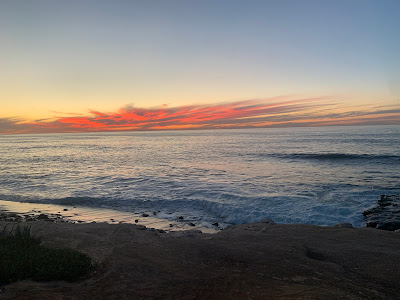 I'm not ready for the XIST season to be over -- like, at all. But at least there are marine invertebrates and desert plants to turn to when the last frisbee hits the turf, for now.