Skip to main content
Posted by Nina Lester Finley May 22, 2018

Holy moly, this deadline came up fast! Here's my third quarterly report for the Thomas J. Watson Foundation, one of the few requirements asked of fellows. If you like, you can revisit my first and second quarterly reports here. Without further ado... 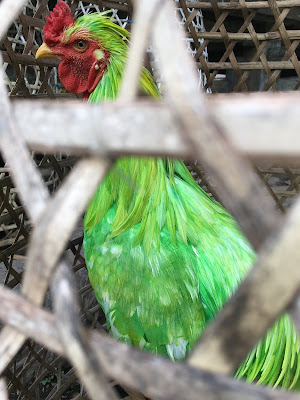 I am sitting at a kitchen table inlaid with green and blue tiles, under a leaky thatch roof in the town of Sukadana, West Kalimantan, Indonesia. Water is billowing in through two windows and pooling in an aluminum pot. The splatter occasionally coats my laptop screen with mist. I know the storm is directly overhead because the thunder is almost simultaneous with blue-white flashes of lightning, and every clap sounds as loud as an old-growth tree crashing into the kitchen. I love these nightly tempests because they keep the rainforest steamy and damp. They also turn my yard into a mud puddle.


Last I wrote, I was beginning my month with Reef Check on Bali. Although I did produce some documents – a fish identification guide, an infographic on Bali’s 2016 coral bleaching event – the work was unsatisfying. Many days, I arrived at the open-air office to find no tasks. I came to expect the phrase, “Why don’t you take the day off?” with disappointment that this organization was not utilizing my potential. On reflection, I realize most of the blame was my own. I should have invented tasks and been vocal about my strengths, respectfully reminding my supervisors that I can be an author, grant-writer and marine ecologist. Instead, I presented myself as disposable, and that led me to feel disposable.


For my Reef Check capstone I joined a gathering of Pokwasmas, a fishermen’s cooperative in the village of Penuktukan, to present on reef resilience to climate change. I was honored to speak, but because I presented in English with no translation, only a handful of the audience understood. Since then I have learned to advocate for my language needs. Now when I present, I directly ask one bilingual person to translate for me, and I pause between each sentence to make sure my meaning gets across.

After the meeting, I spoke with Nyoman Sugiarta, a tourism-operator turned full-time conservationist. He pours concrete hexadomes for coral substrate and canoes the marine preserve to discourage poaching. On his forearm, an inky ecosystem of turtle, coral, fish and sea grass entwine the word “Conservation” in newspaper font.


“Why do you feel strongly about coral conservation?” I asked Nyoman.

“I used to think corals were rocks,” he explained. “Then Reef Check came here and told us they were animals.” Nyoman became a diver and began paying attention to the strange, gelatinous lifeforms. “Now that I know they’re alive, there’s so much to learn! I can’t let them die.”

I was surprised that Nyoman’s explanation contained no economics. As an environmental biology student, my training often implied that wealthy Westerners can afford to conserve an ecosystem for beauty and curiosity, but subsistence resource-users conserve ecosystems for practical reasons, like increasing the harvest of fish. How quickly Nyoman dispelled that myth. Driven by his urge to learn, he traded his job for unpaid conservation and occasional scuba-dive guiding. Two summers ago, when I was a wilderness educator in Alaska, I tried to cultivate curiosity for slimy things: marine invertebrates, microbes, slime molds. In Nyoman I found an example of how powerful curiosity can be.


In mid-February I moved to the Malaysian metropolis of Kuala Lumpur. My boyfriend Collin and I converged for a marvelous two weeks diving the corals of Perhentian Kecil, celebrating the end of Chinese New Year with 40,000 revelers in Penang, and visiting our friend Marra during her English-teaching Fulbright in Melaka. We tried to understand the threads that weave Malaysia’s tapestry of religions, genders, and races.

Once Collin left, I enjoyed the resources of a big city by touring One Health labs and giving a lecture at Monash University on “monsters and microbes.” I reunited with a great friend from high school, Nithya, who is loving her life as a solar-energy firmware engineer in Cambodia. Seeing Nithya’s drive and joy about her career got me thinking hard about my own. Compared to Nithya’s startup – young, efficient, impact-driven – my environmental nonprofits seemed ineffective and bureaucratic. I struggled to reconcile the fundamental difference between engineering, a building science, and ecology, a science of observation. Nithya had been trained to solve problems; I’d been trained to study them.


With that mixture of inspiration and apprehension, I returned to Bali for Anuar Abdullah’s course in coral propagation. Anuar had an intense face, tan and deeply lined. His black T-shirt bore the skull-and-crossbones of Sea Shepherd, an organization of vegan pirates famous for sinking whalers. Coral gardening and piracy might seem like odd partners, but it makes sense: both groups have a take-no-prisoners attitude toward conservation. The first words out of Anuar’s mouth were, “Big things are happening. Corals are dead. We don’t have time to mess around. This is too urgent.” Anuar taught me details, like how many drops of superglue to use when attaching a fragment of Acropora to aragonite rock, but I was more interested to uncover why Anuar is successful (his fever-pitch drive to save the ecosystem he calls home) and why he is not more so (he works alone). I was daunted by Anuar’s stance that purely-academic careers are unethical in this critical moment of our planet’s health. Is a life of solitude and heartbreak the only way to fight for an ecosystem? I wondered.


Before I left Bali, I met up with my ultimate frisbee team, UB7, for the tournament they host every year, the Nusantara Cup. Our team leader Alex invited me to be Spirit Captain, a uniquely-ultimate role that entails holding the team accountable for high integrity and leading a conversation after each game to discuss our opponent’s sportsmanship. I am proud to report that UB7 was the first Indonesian team in history to win the Nusantara Cup!


The following morning had an inauspicious beginning. I was exhausted as only frisbee players will understand. My lungs burned, my hips flexors ached, the skin on my lower lip ballooned into painful blisters, and I wheezed with a nasty cold. The next ten hours in planes and cars were miserable. Little did I know, I was en route for the best month of my year.


That evening I arrived in Sukadana, a village nestled on the edge of Gunung Palung National Park in Kalimantan (Borneo), Indonesia. This lowland dipterocarp rainforest is home to 3,000 of the last Bornean orangutans. I’m volunteering here with Yayasan Alam Sehat Lestari (ASRI), roughly translating to Healthy Balanced Nature, a pathbreaking Planetary Health hospital with a mission to “save the rainforest with a stethoscope.” The model behind ASRI is simple: orangutans are expected to go extinct by 2050 due to habitat loss; most illegal loggers wish to stop but cannot because timber is their only source of cash for healthcare; to save orangutans, we need a human hospital.

Over the past month, I have worked on education with Amad and Etty, communications with Oka, grant-writing with Monica, and reforestation with Dika. I’ve gotten to share a house and meals with ASRI’s founder, Kinari. All day I feel respected and productive. In the afternoons, the clinic staff becomes a riotously fun group of friends. We watch the sun set over the ocean, sip kelapa coklit susu (fresh coconuts filled with iced chocolate milk), watch horror films and play cards. I’ve taught the staff to bake chocolate-chip cookies and buttercream cupcakes. They've taught me to speak Bahasa Indonesia and slow down my pace. I leave tomorrow, but on no account am I ready to bid this place goodbye.


For the past few years, I've been seeking an interdisciplinary lens through which to approach my work, one that embraces complexity. The Anthropocene Epoch demands a reckoning with entanglement; we will not find success by inspecting any one element in isolation. Initially, I titled my Watson project "One Health" because that movement -- the intersection of human, veterinary and environmental medicine -- seemed like a good stab at integration. But here at ASRI, I’ve learned that I identify even more with "Planetary Health," the recognition that solutions for human and ecological health must be integrated. ASRI does not draw a line between trees and bodies. It delivers babies, provides dental checkups, plants rainforest saplings, and buys back chainsaws from loggers to facilitate a regenerative economic spiral. With this lens, I have a new goal for my PhD. I want to identify and implement win-win solutions in which human health problems are addressed by restoring ecosystems.

Working at ASRI is emotionally exhausting in the best way. Every day, I find myself revising my place in conservation and developing hope that real change is possible. Since 2007, ASRI has recorded an 89% decrease in logging households and a 25,000 hectare increase in forest cover. The end of illegal logging in Gunung Palung National Park is within reach.


In Brazil, I learned how humans, pets and wildlife are connected by disease across a rapidly-changing landscape. In Madagascar, I probed that connection to find out whether forest fragmentation directly contributes to zoonotic spillover of viruses. Now, in Indonesia, I am seeing how the upward spiral of integrated human and ecological restoration really works to create health.

Though I’m still in denial about leaving Sukadana, I will fly tomorrow to Tanjung Puting National Park to witness rehabilitated orangutans in their wild habitat. I then cross to Malaysian Borneo for two weeks of coral propagation and one of hornbill research. At the Planetary Health Alliance Annual Meeting in Scotland, I’ll present on Malagasy sand-flea season and climate change. I have tickets to visit a bird observatory on a northern Scottish isle and the London School of Hygiene and Tropical Medicine. In mid-June, I helicopter in to the most extreme leg of my Watson journey, the Arctic. In lieu of my original plan to visit anthrax-infested caribou carcasses in Russia (which is now on the do-not-travel list), I will volunteer with Dr. Emily Jenkins to test Arctic foxes and mosquitoes for emerging pathogens at Karrak Lake, a remote outpost in Nunavut, Canada.


I can’t decide if I’ve learned more about myself or the world these past nine months. I suppose it hardly matters. As I prepare to leave Asia for three Western nations, I’m starting to sense the Torschlusspanik (an excellent German term for “the panic one feels as gates are closing or an end is nearing”), but I can hardly imagine August as an ending. Every day, the world feels larger and richer with beginnings than before.