Here's something a little different: a fiction story! I wrote this during our Semester in the West writing workshop with author Ann Walka. She instructed us to write a story based on the place we were in, Comb Ridge, a magnificent geological formation near Bluff, Utah.

Sadly, the property was sold on October 17, 2016 from the State of Utah to a private corporation, Lyman Farms, and it will no longer be accessible to wanderers and writers looking for inspiration. More on that transaction here.

While you consider the privatization of public lands, please enjoy this simple story.

They walked to the top of the slick-rock hump. The dorsal fin of a stone whale, they called it.

“Do you remember when we pretended to ride the whale and held our breath?” she asked.

She loved his imagination. No matter where they went, he found magic lurking just beneath the sandstone, between the points of yucca leaves, hovering over one-seed junipers. His mind spun worlds.

The top of the whale-fin rock wasn’t really the top; it just looked that way from the bottom. The first time they had climbed there together, she has been devastated to find that their sweaty hike had yielded nothing but a taller peak in the distance. She was out of breath and thirsty. She has always assumed the top of things was objective.

But he’d taken her hand and called with full lungs, “We’re here!” And he’d been right. One step further in any direction, he’d claimed, would take them down. Even that peak in the distance was below. All it took to be on top was a choice of perspective. 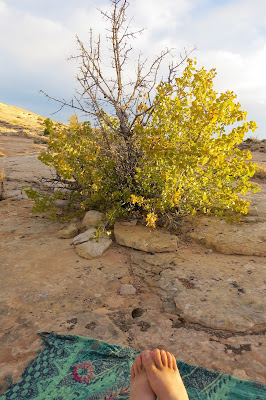 She liked to come here still, to the top. On the whale’s flank, a rain-worn swath of stone, she spread her picnic blanket. Green cotton splashed with ruby bird feathers. Worn too thin to do much but mark a square for them on the sun-soaked ridge. She lifted pasta from her wicker basket, the kind with a flap on either side and a hinge in the middle. Two plums wrapped in paper. Biscuits, warm in the center. A stick of butter. A jar of prickly-pear jam they’d made three years ago from the last cacti he’d tended in the garden. 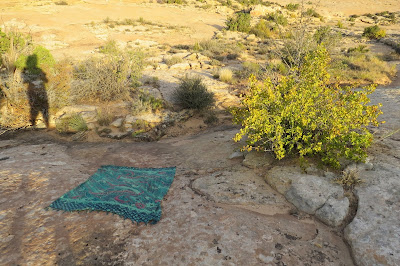 A spotted lizard watched from the shade of a single-leaf ash as she divided the food onto two plates. She ate her portion of pasta plain. She buttered both biscuits and chewed one as yellow fat dripped from the incision she’d made through the heart of the other. The plum, she consumed in three bites: top, side, then all the rest, just like always. It tasted like his lips. She spit the pit under the ash, and the lizard retreated deeper into its cool foliage. 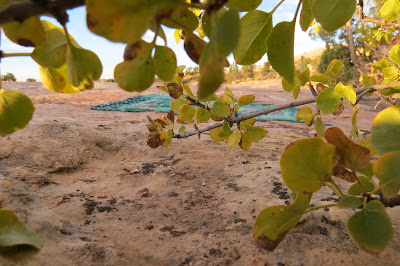 “Happy anniversary, my love,” she said to the plate still piled with food.

It was then that she noticed. Once again, she’d forgotten to open the jam.