Skip to main content
Posted by Nina Lester Finley May 31, 2016

2016 began with owls. On New Year’s Day, I journeyed north through a light snowstorm to Skagit with a group of friends known as Bird Nerds Birding Club. (I met its founder, Courtney, while volunteering for Seattle Audubon’s Christmas Bird Count. Birding is the best way to make friends!)

Washington State is home to fifteen species of owl, and I was lucky enough to see three of them this winter and spring. Our first stop: short-eared owls, Asio flammeus.

These owls were a lifer for me. I soon learned to recognize their distinctive flight, long-winged and loping like a butterfly’s. 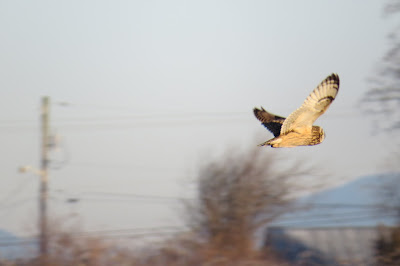 In this neck of the woods, the short-eared owls fly by day, and they convene a following of dedicated photographers. When the owls weren’t nearby, I enjoyed watching scattered huddles of men and women in full camouflage attire, their telephoto lenses propped on sturdy tripods and transported in jogging strollers. 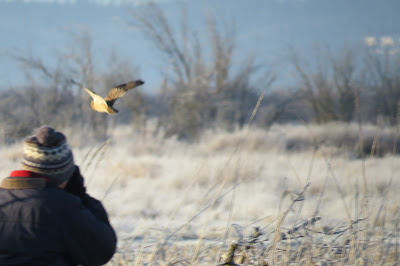 A month later, I returned to college in Walla Walla and invited Margo, Lizzie, and Molly Moo Moo to join me for a lap of Bennington Lake. Birders come in two categories – Sitters and Flitters – and this crew of budding ornithologists earned the first title with their patience. After we heard a single hoot, they took up posts off-trail for five, ten, twenty minutes until finally Margo spotted the owl. We stalked closer and watched the resident pair of great-horned owls watch us.

The baby owls thought. All owls think a lot.

If you know what’s up, you’ll recognize this conversation between three great-horned owl branchers from the wonderful children’s book, Owl Babies, by Martin Waddell.

Last week, near Bennington Lake, I got to meet Sarah and Percy. Bill was probably snuggling with his Owl Mother somewhere. I was on an excursion with my advisor, Tim, and several professors and classmates on Reading Day. (That’s the day between the last day of classes and the first day of finals, and it’s best spent doing anything but studying.)

It’s been an incredible spring for owls. A few days later, I returned to the same lake with Thomas for a mid-finals birding break. After listening for yellow warblers in the willows, we heard a raspy cough from high within a cottonwood – it was Sarah and Percy, begging for food from their good old ma!

Before our eyes, an adult great-horned owl delivered a writhing gopher snake to one of the owlets. 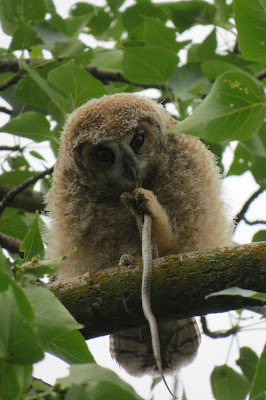 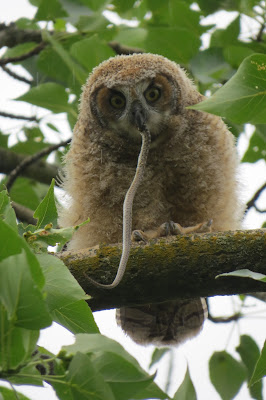 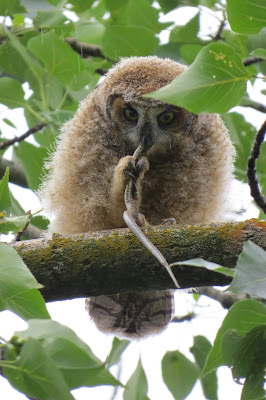 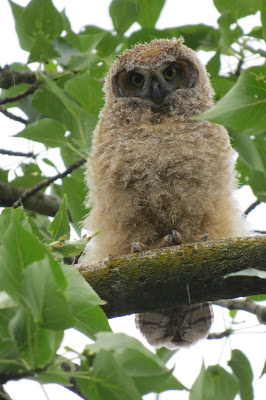 I’ll let the video speak for itself.

Only a few minutes later, she returned with a second snake, but the first owlet (who I’m certain at this point was Sarah) begged more convincingly and snagged that snake, too. The second owlet, Percy, hunched dejectedly in the rain while Mom took a break.

As if that sighting wasn’t enough, on the last day on finals, I received a phone call from my friend Joe.

“Check your texts! I sent you a photo,” Joe instructed. “I found a bird for you to ID!”

The photo showed a puffy western screech owl, Megascops kennicottii, nestled in the knot of an oak.

“She’s right here on my street,” said Joe. “Come see!” Through the phone, I could hear the porpoise-like laugh of the owl.

Thomas and I went to find her, and there she was, her ruffled feathers blending with the rough bark. She eyed us with sleepy disinterest. 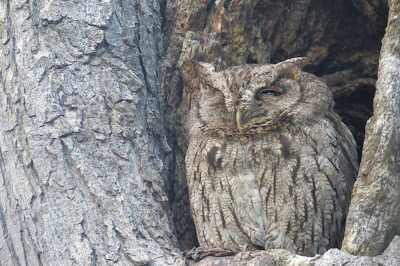 Maybe she was waiting to deliver a letter… or just hunt a mouse.