The Fruit Barn, Dead Geese, and a Bobcat: We're Off to Big Sky!

Finally, at three on Friday afternoon, the car was packed. Amelia had finished her environmental methods paper, Anna had ordered us take-out sandwiches from Graze, Galen had found his cross-country ski boots, and I had arranged all my plants in the living room for a friend to water over spring break.

Taylor Swift dominated our soundtrack as we drove out of Walla Walla, through rolling brown wheat fields with thin green shoots, and past the stench of the Wallula Paper Mill. We stopped at one of the famous eastern Washington fruit barns for salted caramel and peanut butter fudge, honeycrisp and pink lady apples, and a cultural experience.


I sampled chocolate-covered mangoes and chili-spiced almonds. (The elderly man next to me declined the almonds, citing his "gringo palate.") A customer at the soda bar received a jumbo-sized Pepsi cup stuffed with ice cream, and two enormous scoops were balanced on top. My cashier asked if I'd like my apples rinsed -- to remove the pesticide residue, I assume. The parking lot was home to a herd of absurdly long-horned cattle.

The warehouse of chocolate candies and canned fruit products made me dizzy. I asked the young woman who cut my quarter-pound chunk of fudge if she ever had to throw away unsold chocolate. She told me, "Never! I've never seen a batch last more than a couple days." These fruit barns are a quirky phenomenon.

As darkness fell, we continued north into Ponderosa pine forest. We stopped at the Sinclair Dino gas station in the impossibly sleepy town of Mullan, Idaho where we met the friendly young cashier who let me roll out my sore leg muscles on the floor. We filled the tank, thanked him, and left -- only to return in three minutes for directions.

It was my turn to drive on the dark stretch of I-90 East over Lookout Pass, the border between Idaho and Montana. Just after we crossed the state line, a bobcat ran across the road in front of us! She was the size of a dog, but with the regular gait and dark brown fur of a cat. Luckily I braked in time to let her get across safely.


"Did you see that?!" I yelled. Nobody had. I was thrilled to see my first bobcat, but I wish it had been in rather different circumstances!

We spent the night at a friend's house in Missoula, and continued our trek the next morning. We stopped for lunch (bison burger, oh boy!) at the Hummingbird Cafe in Butte, Montana.

The broken windows, falling-over retaining walls and abandoned buildings of Butte reminded me of certain neighborhoods in Ecuador. The looming, dusty brown hills with paths and words etched into them reminded me of Cusco, Peru.


Before we left town, we had to stop at the infamous toxic lake, Berkeley Pit. This mine produced one third of America's copper from 1955 to 1982. We approached the Pit through a fake mine-shaft for tourists. 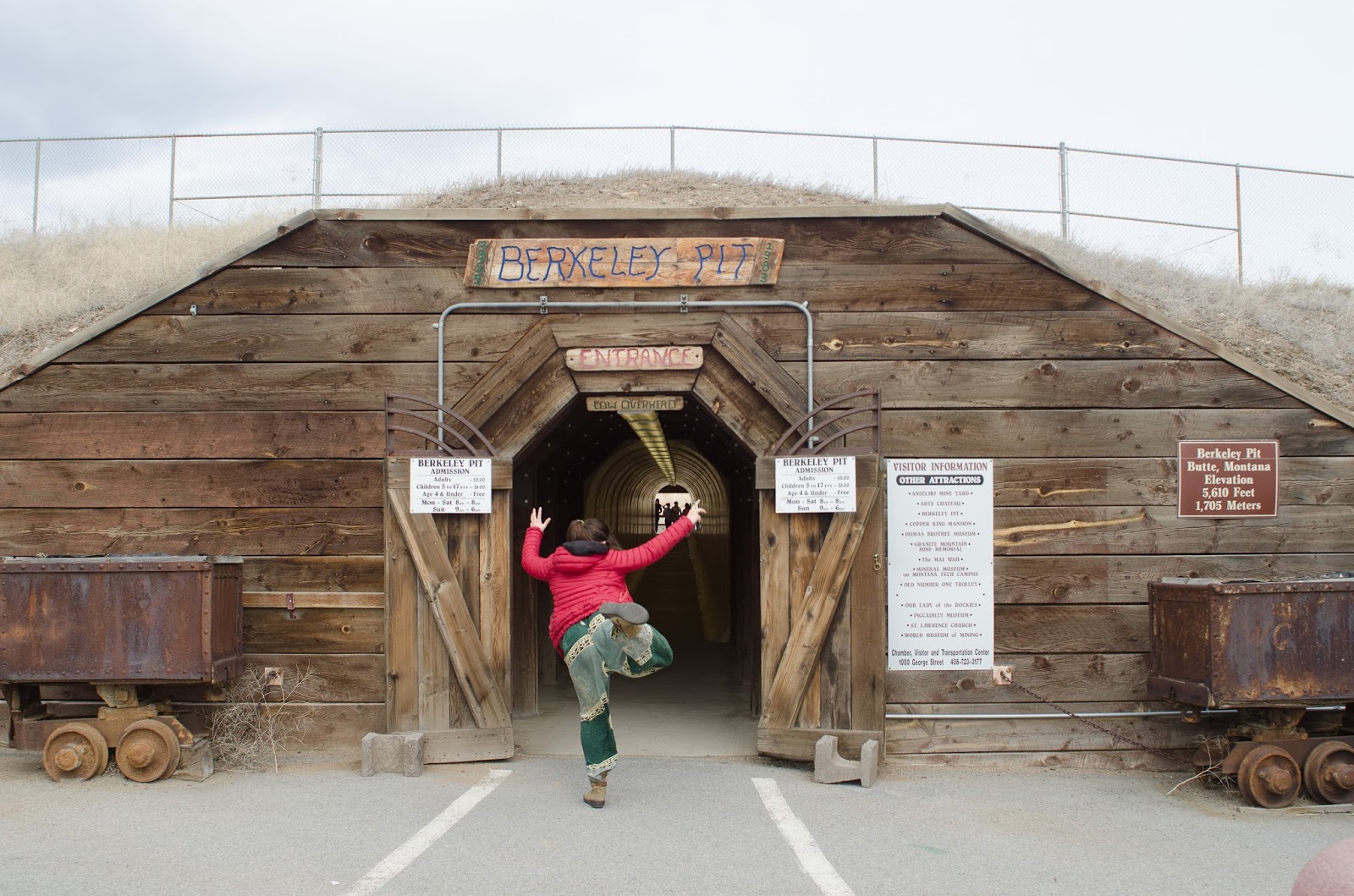 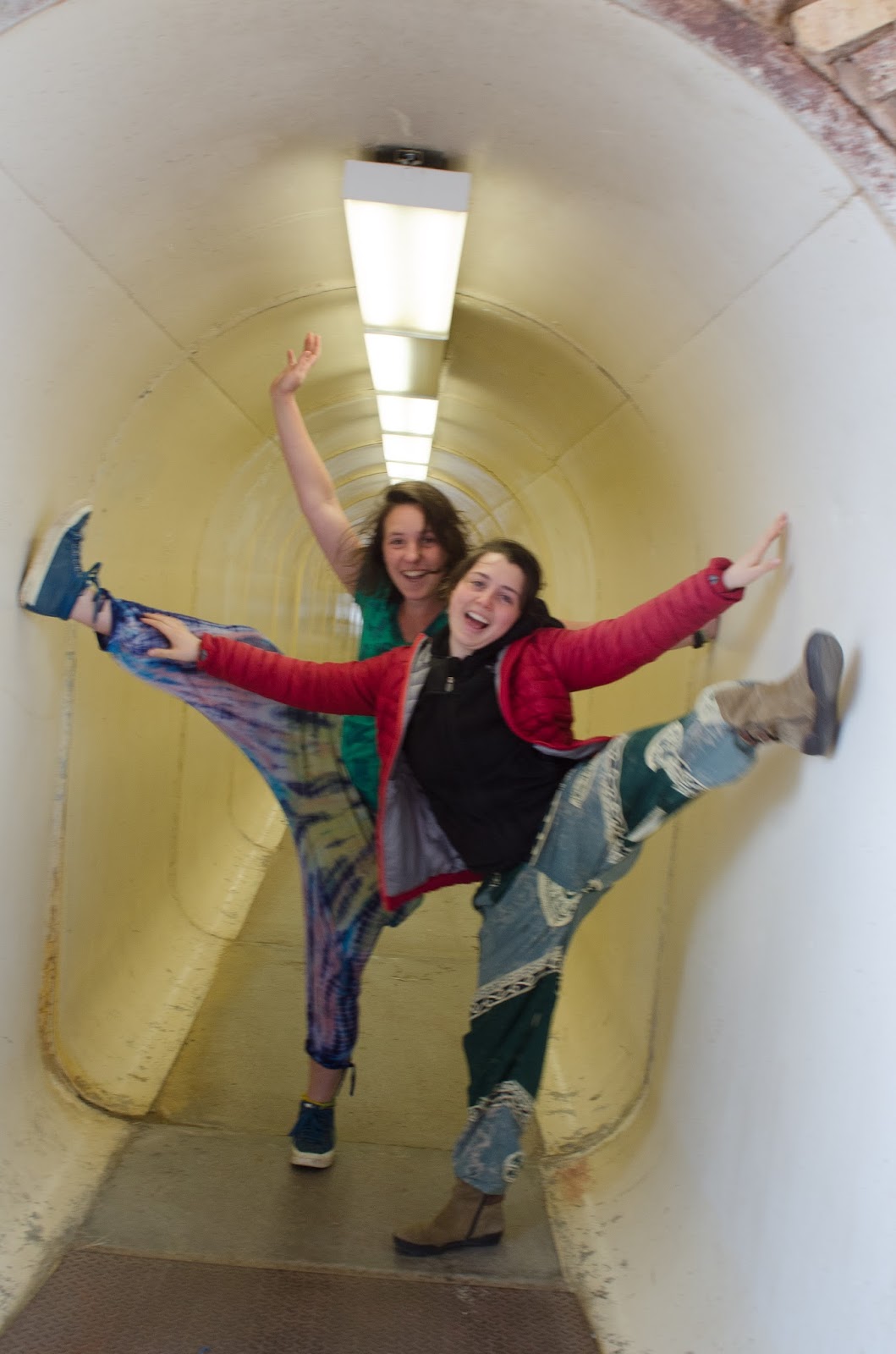 The lake holds 40 billion gallons of water. It looked huge from the surface, and became even more impressive when I realized the sloped sides got progressively steeper as they went down below the surface. 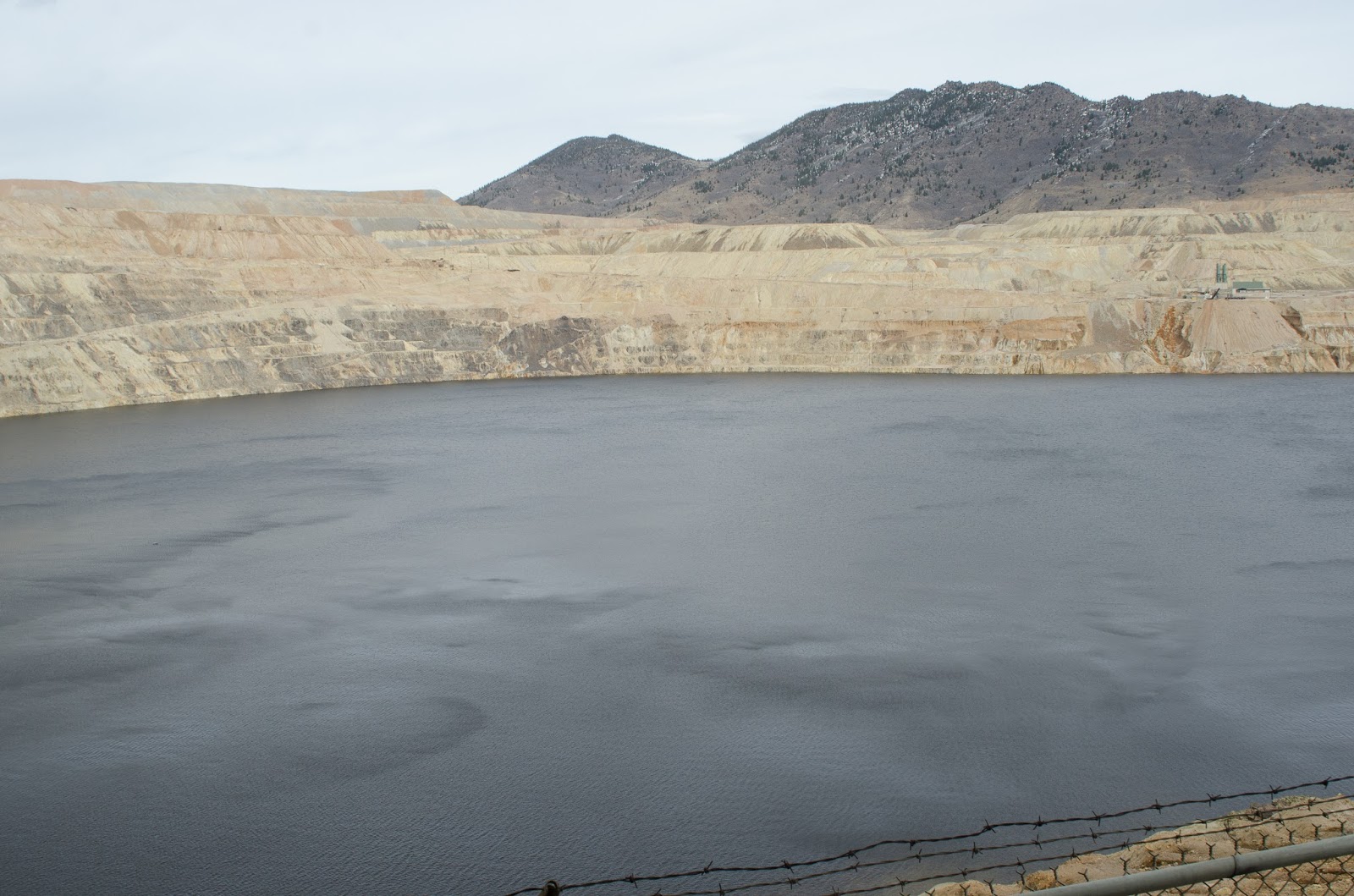 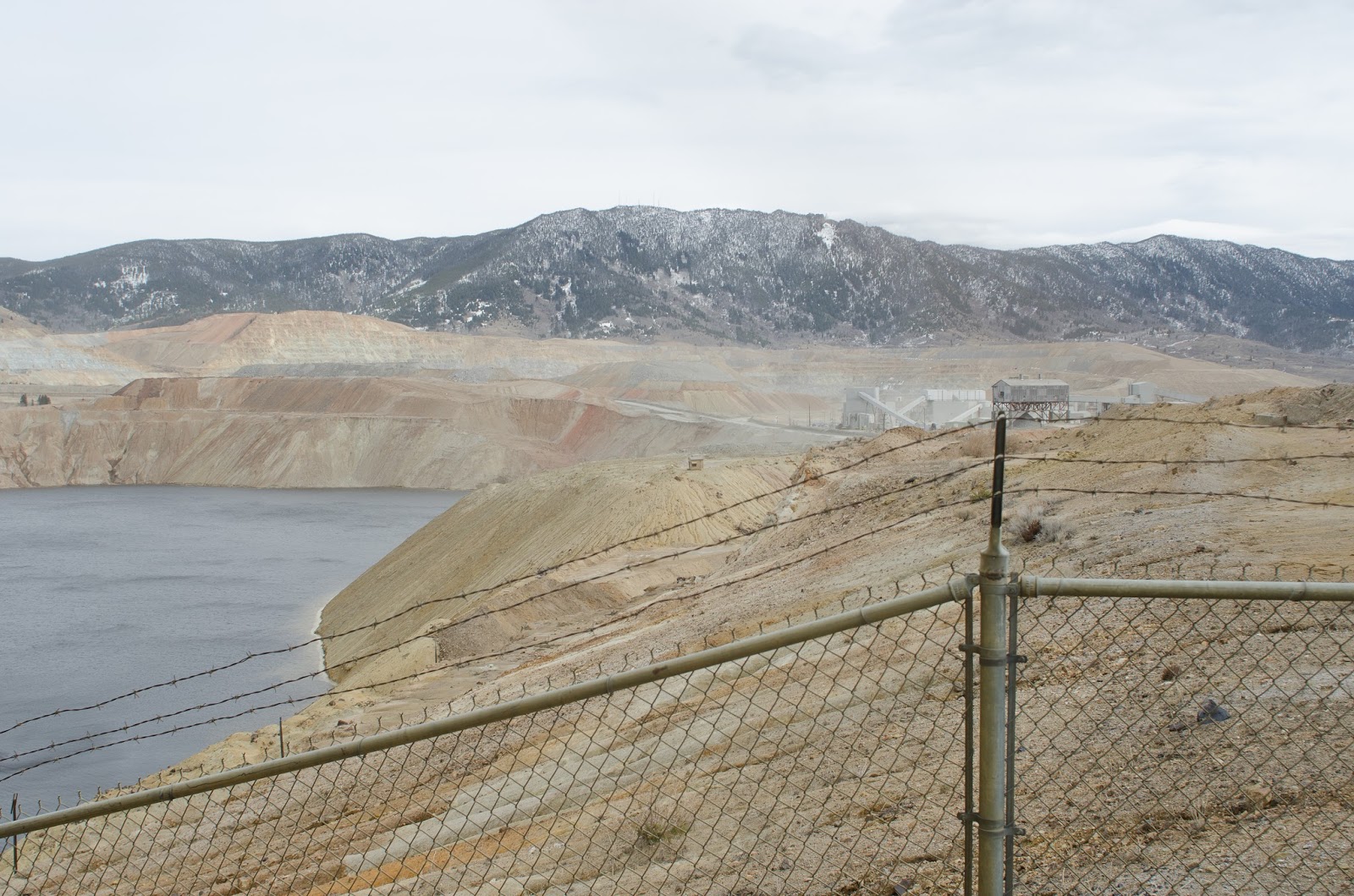 An infographic sign informed us, "The water has very high concentrations of copper, cadmium, cobalt, iron, manganese, and zinc." It also mentioned the concentration of arsenic and the water's stunningly acidic pH of 2.5.

Meanwhile, a reassuring voice over the loudspeaker reminded us about the water treatment facility that's being built to meet EPA regulations. The facility will treat seven million gallons of water per day and discharge "clean water" into Silver Bow Creek. The treatment plant is "designed to operate forever."

Another infographic noted that "even with the metals and the acid, the Pit supports life." Two species, to be exact: waterboatmen insects and an iron-digesting algae. I think the sign was trying to convince us that the Pit isn't all that toxic after all, but it made the opposite impression on me. Life is amazingly adaptable -- the fact that only two species manage to survive in the Pit persuades me of its extreme toxicity.

Back in the car, we listened to a fascinating Radiolab podcast about the Berkeley Pit. We learned about a flock of 340 snow geese that died on the water in the 1990s, the first green slimy life in the Pit discovered by two married chemists from Montana Tech, and an incredible cancer-curing yeast. You don't want to miss it. Check out the podcast here: Even the Worst Laid Plans?

The Berkeley Pit got me thinking about a different copper mine: the proposed Pebble Mine near Bristol Bay, Alaska. Pebble Mine is being contested by native groups, fisherman and environmentalists for its potential to destroy the world's largest remaining wild salmon run. If it goes through, Pebble Mine will likely be the largest open pit ever built in North America, dwarfing the Berkeley Pit and rivaling the Grand Canyon with its depth of nearly a mile.

After seeing the Berkeley Pit, learning about its toxic effects on ground and surface water, hearing of the untenable plan to treat its water "forever," and listening to the clearly deceitful message of environmental consciousness at the Pit viewing site, I am convinced that we should take action to prevent the Pebble Mine from being built.

By the mid-afternoon, we arrived at Anna's house in the gorgeous snowy mountains of Big Sky, Montana for a hot meal of potato-leek soup and blackberry cobbler. (Thank you Barbara!) Finally, we made it to Amelia and Galen's house where we received a warm welcome from Beth and John. I can't wait to strap some skis on my feet for the first time and get out into the lodgepole pines, Douglas firs and Engelmann spruces out the back door!