Skip to main content
Posted by Nina Lester Finley May 01, 2018

I clutch a butcher knife and a sack of apples as I speed past goats and banana trees on the back of Amad's motorcycle. Today, I will be observing an ASRI Kids program and supplying a vital service: apple chopping.

In the one-room school building, Amad gives a lively PowerPoint about washing hands with soap and water. He explains nutrition and the importance of healthy foods. I steadily slice apple after apple into juicy quarters. Amad expected 24 kids, but apparently word has spread. Today, the classroom bulges with 33 rapt elementary-schoolers. I have to cut the larger apple slices in half to make sure everyone will get one.


The kids line up for lemon-scented hand soap and splashes of water. They scrub their fingers meticulously, embodying the essence of hygiene. I pass out an apple slice and a tart green orange to each student, then sit back to relish my own. Fresh fruit has never tasted so good.

The room erupts with eager kids, straining their hands to the sky, halfway off their chairs. Amad selects a serious girl who's sitting in the back corner. She stands to deliver her answer.

"Milk, rice," she begins confidently, then stalls out. The room hollers ideas at her, but I think they only add confusion. She looks to Amad for support. He gives her an encouraging smile. "Vegetables!" she finally gasps, doubling over in relief. She walks to the front of the room to claim her prize. Without looking, she dips her hand into a canvas bag of goodies and pulls out a magnifying glass. Maybe she'll use it to examine bugs in the schoolyard tomorrow.

Education is one of the five prongs of Alam Sehat Lestari, better known as ASRI, the conservation-healthcare initiative in Indonesian Borneo where I'm a volunteer. (Check out my post, Spirit: from Balinese Frisbee to a Bornean Hospital, for background.)

The five prongs of ASRI are:
Each of these prongs is supported by multiple projects on the ground. To learn about prong five, restoration, you can read Rainforest's Rebirth, my recent post about the Laman Satong reforestation nursery.

Over the past three weeks, I've been directly involved with prong four, education, through ASRI Kids. This program teaches fifth graders about Planetary Health topics ranging from nutritious eating and hand washing, to wildlife and ecosystems, to sustainable living. It's led by the wonder-woman educator, Etty Rahmawati, and her talented co-worker, "Amad" M. Zulkarnaen.


Below is a three-minute video about ASRI Kids produced by Jane Huff, an ASRI volunteer and then-student of Northwestern University. It was filmed in 2013, one year after the program was created. ASRI Kids has come a long way since then.

The magic of ASRI lies in its combination of accurate knowledge with hands-on activity. One of the kids' favorite projects is making recycled paper. They learn to be creative with trash, appreciate forest resources, and reduce waste.

Behind the scenes, I've spent much of my time crafting new curriculum for Etty to use in her ASRI Kids classes. So far, I've made PowerPoints about mangrove swamps, coral reefs, climate change, plastics, microbes, zoonotic disease, and the lemurs of Madagascar. Climate change was a big hit with ASRI Teens. For the first time, the teens understood the connection between deforestation and sea level rise -- and why there is a giant poster of an iceberg in the ASRI clinic! They took a group photo with the iceberg and brainstormed ways to reduce emissions in Sukadana, like putting up signs at warungs (cafes) asking customers to think twice before requesting a plastic bag or straw. (Plastic trash is burned here because there is no landfill system. Plastic is made from carbon, and burning it releases carbon dioxide.) Long story short, teens are awesome.

Madagascar and lemurs might seem far removed from Borneo, but the links are strong. Two thousand years ago, Madagascar was originally colonized by seafaring traders from Sulawesi, an island next to Borneo. Malagasy shows more linguistic connections to Indonesian than to any other language. Borneo and Madagascar, two of the largest islands in the world, are both covered with fast-disappearing tropical rainforest. Both islands are home to endangered endemic primates: Bornean orangutans and proboscis monkeys here, and all species of lemur on Madagascar.

This year, Etty has finished her usual curriculum on Bornean wildlife, but her students keep coming back for more. Time to expand! And why not lemurs? After all, I grew up learning about African giraffes and Amazonian anacondas and Asian elephants. The strange creatures of another part of the world can be a reminder of how spectacular our own native organisms are.

Making PowerPoints is fine, but it's nowhere near as fun as teaching. Last week, Etty gave me the wonderful opportunity to present my lemur slides to the Sungai Mengkuang ASRI Kids, a local group that meets behind the hospital after school. Etty acted as translator, repeating all my sentences in Bahasa Indonesia with the wide smile and clear enunciation of a seasoned educator. I couldn't have asked for a better teaching partner.


The kids learned incredibly fast. It must be their combination of their young brains, their lack of inhibition about participating, their willingness to make mistakes, and their supportive environment cultivated by Etty. Near the end of class, I taught the kids about "nocturnal" and "diurnal" animals. Then I showed a photo of a tarsier, a tiny prosimian primate related lemurs, climbing a branch at night.

"Is this animal nocturnal or diurnal?" I asked.

Before Etty could translate, the children called out in a chorus, "NOCTURNAL!"

The next photo showed me in my signature broad-brimmed hat. "And what about this animal?" I asked. "Nocturnal or diurnal?"

The kids didn't miss a beat. "DIURNAL!" they shouted.

Etty and I looked at each other and laughed. In half an hour, the kids had outgrown their translator.

For the comprehension quiz, I asked the group, "What are three behaviors of lemurs?"

One boy, smartly dressed in a button-up shirt and khaki shorts, stood to answer.

"Eating, moving, and preening," he answered in English. I was amazed. How many English-speaking fifth-graders know the word preening?

Since its inception in 2012, the ASRI Kids program has reached 800 children across 23 schools. Alumni of the program can pass on the learning as ASRI Teens. Etty has watched with pride as several of her kids moved on to college, including one young woman who is now studying forestry in the West Kalimantan city of Pontianak.

As I watched the kids follow Etty down a jungle trail after my lemur class, I thought about how lucky ASRI is to have dedicated educators like Etty and Amad passing on their love and understanding of the world to the next generation. 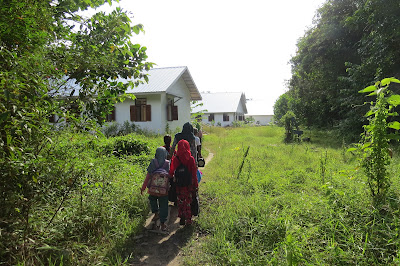