Skip to main content
Posted by Nina Lester Finley May 19, 2018

An Ode to Low Tide

Don't you? That magical boundary zone where tides wash away our notions of permanent dividing lines.

Where a patch of land could be seafloor in the morning and parched earth by lunch, according to the methodical schedule of the moon.

I love shores at low tide, especially. The decomposing-kelp smell of childhood. Low tide brings a little of the ocean within reach, no compressed air needed, just a pair of boots.

In Peterson Bay of Alaska, low tide drops the sea by an extreme 28 feet and exposes organisms like the monstrously squishy sunflower star, a giant who'd rather remain submerged.

On Pom Pom Island in Malaysia, low tide dips below the highest branches of shallow corals. Calcareous Acropora slime themselves with sunscreen and turn lavender wherever they are brushed by air.

In Sukadana, on the coast of Indonesian Borneo, low tide not only turns sea into land -- it turns land into sky.

Here, the intertidal zone is so wide and flat that seawater lingers in its crinkles, unsure of whether to drain into the ocean or wait for high tide to reclaim its territory.

On April the tenth, under a cotton-candy sky and searing sun, I passed by this mudflat with two coworkers from ASRI, conservation manager Dika and Goats-for-Widows program manager Ibu Setiawati.

"What are those people doing way out there on the mudflats?" I wondered out loud. I'd just read Alfred Russel Wallace's account of collecting shellfish in The Malay Archipelago, and I was reminded of his story as I watched colorful figures meander across the mud.

"I think we should go out there and find out," Dika announced. "I'd like to interview a few people, take some photos."

With that, we removed our shoes, rolled up our pants, and took to the mud.

The texture was like pink-silk frosting, deliciously creamy and so smooth you couldn't feel it unless you were moving through it. We sank and rose, hoping each step would not be the one that came up to our ears.

Tiny creatures made themselves noticed. An army of snails, called siput, waved their feeding appendages through the hotter-than-bathtub water.

Skittish sand-colored fish were visible only by their shadows. (Can you find one in the photo below?)

Crabs shaped like dinner scuttled under their low ceiling.

Crabs shaped like manicured witches tried to spear me with long, pointy nails.

By the time we arrived at the scattered people, we'd found many treats in the mud, but nothing they were after. These meanderers weren't interested in snails, fish or crabs. They were hunting bamboo clams.

We met Ibu Ita, a woman clad in a green T-shirt, black ball cap and bare feet. She kindly showed us her bucket, scattered with four jangai (bamboo clams), one kerang (cockel) and her motorcycle keys. It looked like a meager harvest, but she was only getting started. A normal afternoon brings her 200 delectable molluscs.

Ibu Ita explained that clam-digging requires an extreme low tide, available only one week per month. During this week, she and dozens of her neighbors work the mud from two in the afternoon til sunset.

"What do you do with all the clams?" I asked, picturing overflowing buckets at a crowded shellfish market.

"My family eats them all," she replied. No bustling market, then. Just a satisfying meal.

Ibu Ita went back to her digging, and I was mesmerized by her technique. She carried a blade of grass, a bag of chalk and her bucket. Feeling the mud with a pointed toe, like a ballerina, she walked in an erratic zig-zag. Suddenly, she stopped. She'd felt a lump with her toe. I watched as she ran her blade of grass through the chalk to coat it with white powder. She bent over and slid the grass into the clam's house, a small hole in the mud.

The bamboo clam, Ibu Ita explained, is tricked by chalky powder. Thinking it has won the lottery of floating particulate detritus, its favorite food, the clam sticks its meaty siphon out of its hole to capture the snack.

Quick as lightning, Ibu Ita grasped the siphon between her fingers and yanked the clam from its mud. She plunked it unceremoniously into her bucket.

How to dig bamboo clams: watch Ibu Ita in action!

As I made the return slog to shore, I breathed in salty decay and silky chocolate mud. It was a smell entirely familiar and eternally strange, the smell of low tide. 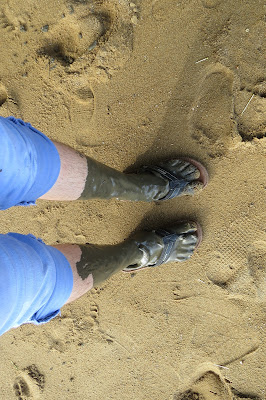