Every Saturday, Equilibrio Azul welcomes between five and thirty kids to the house for EcoClub. The kids show up in motorcycle taxis or walking, from next door or across town, holding a parent's hand or a little sibling's hand or all alone. One thing all the kids have in common is they just can't wait for Saturday mornings! 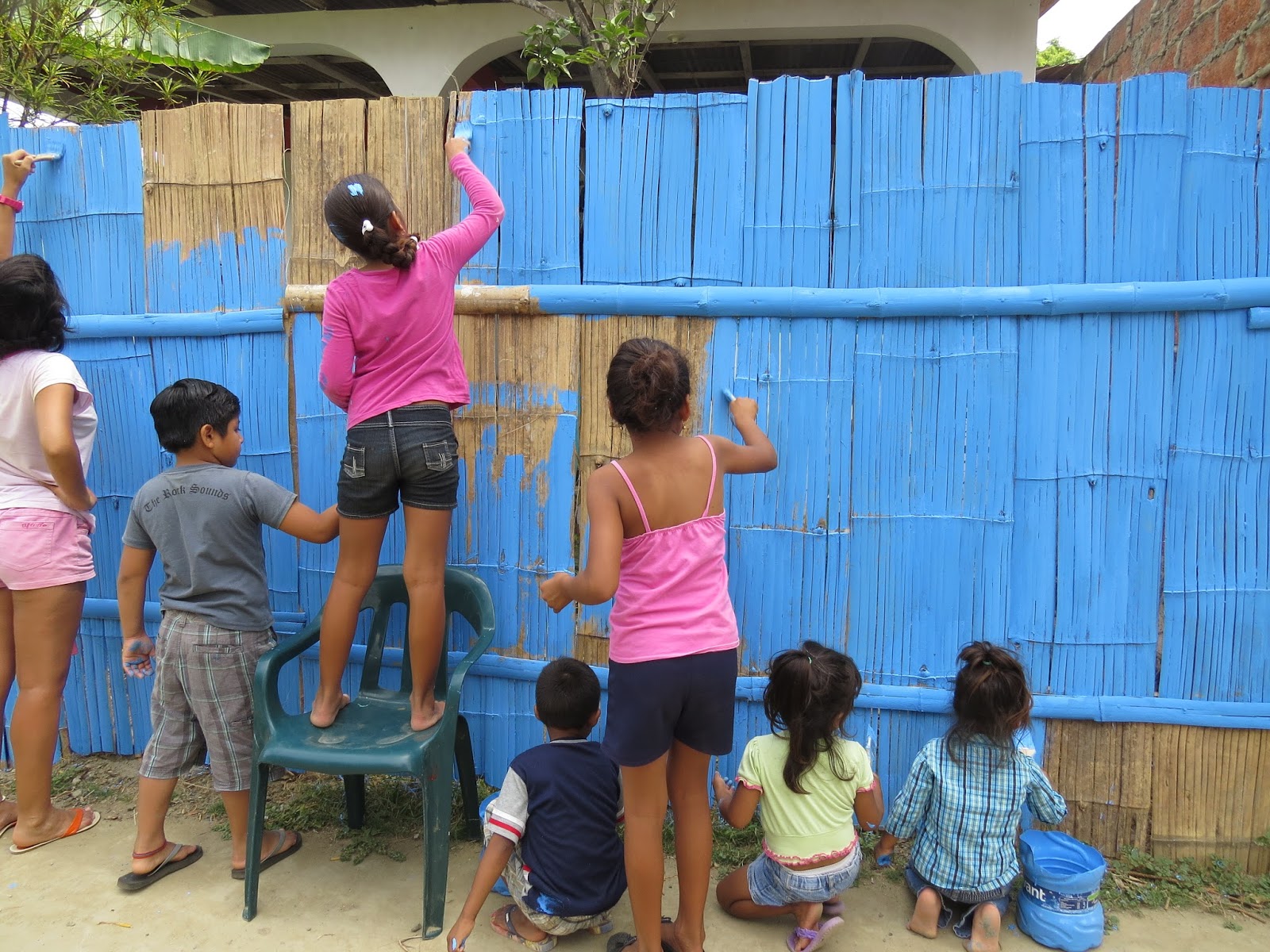 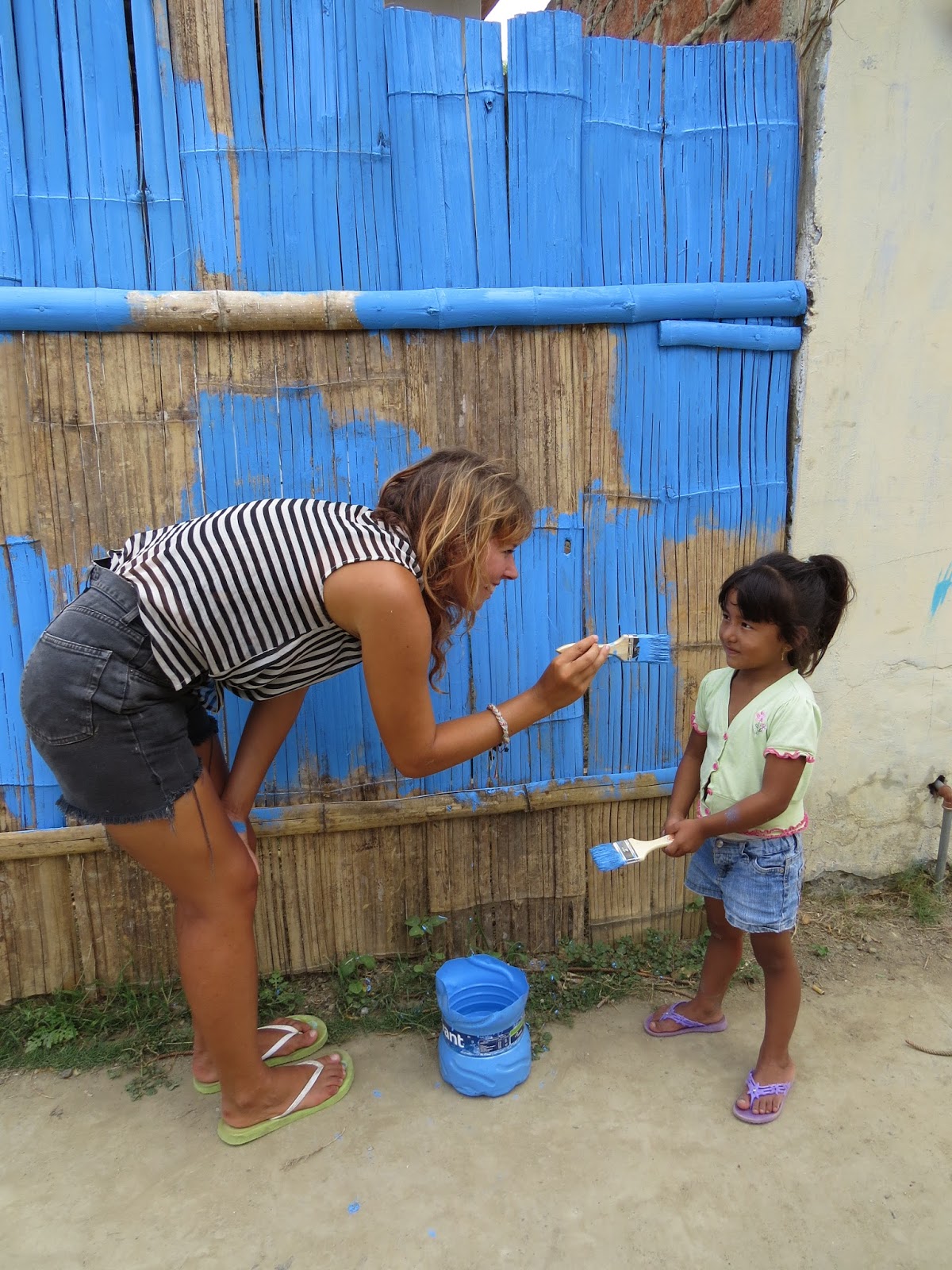 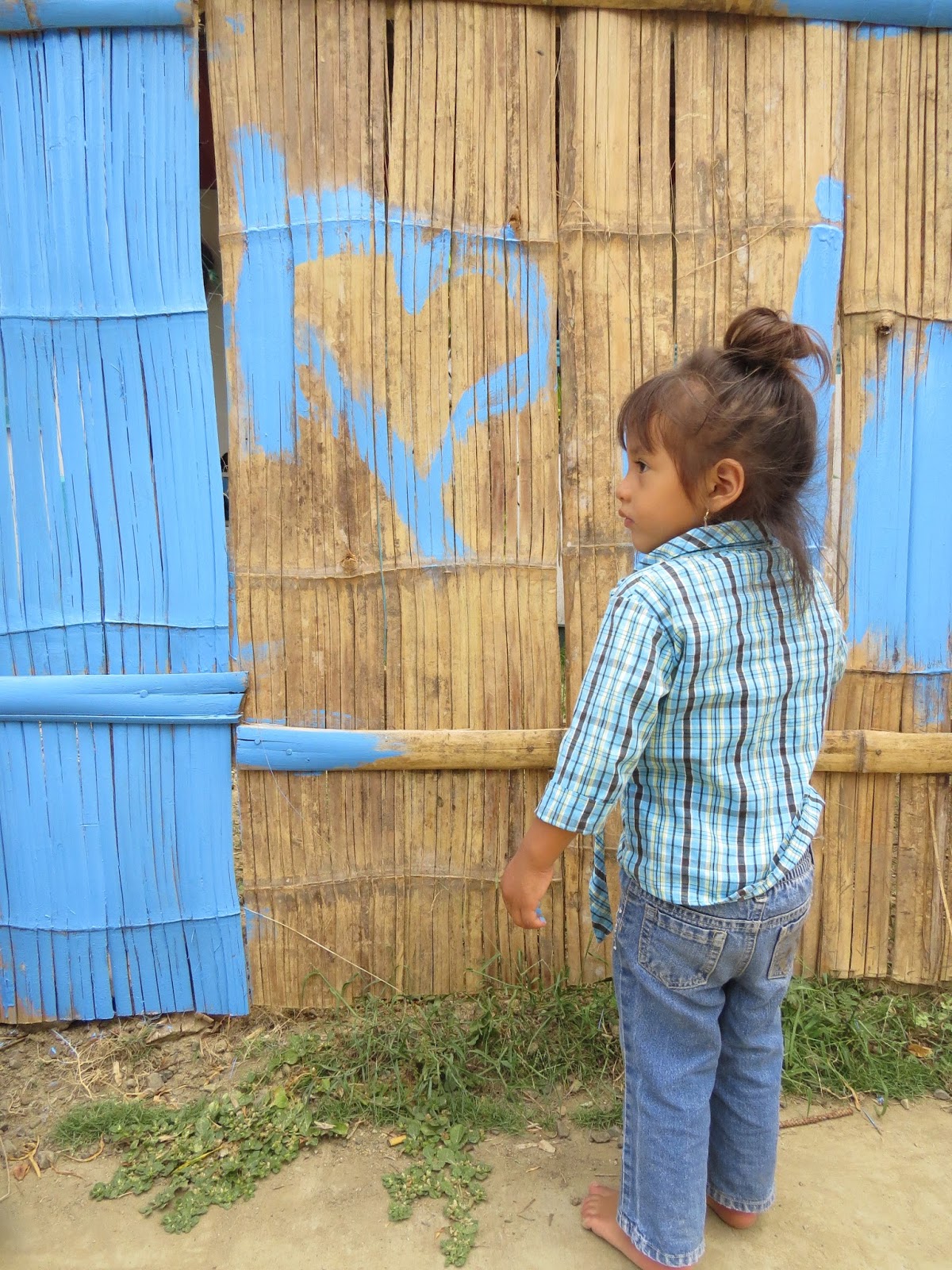 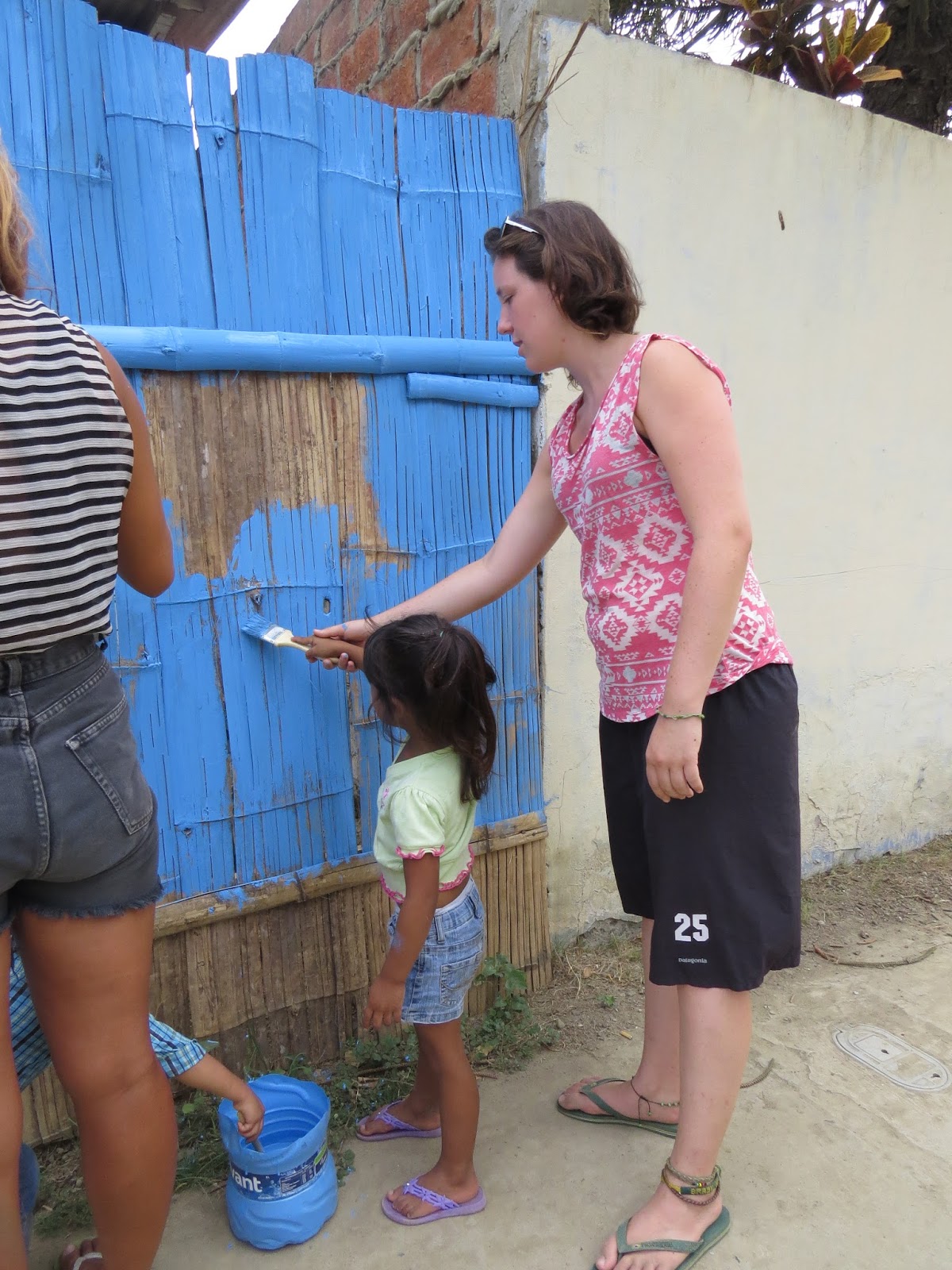 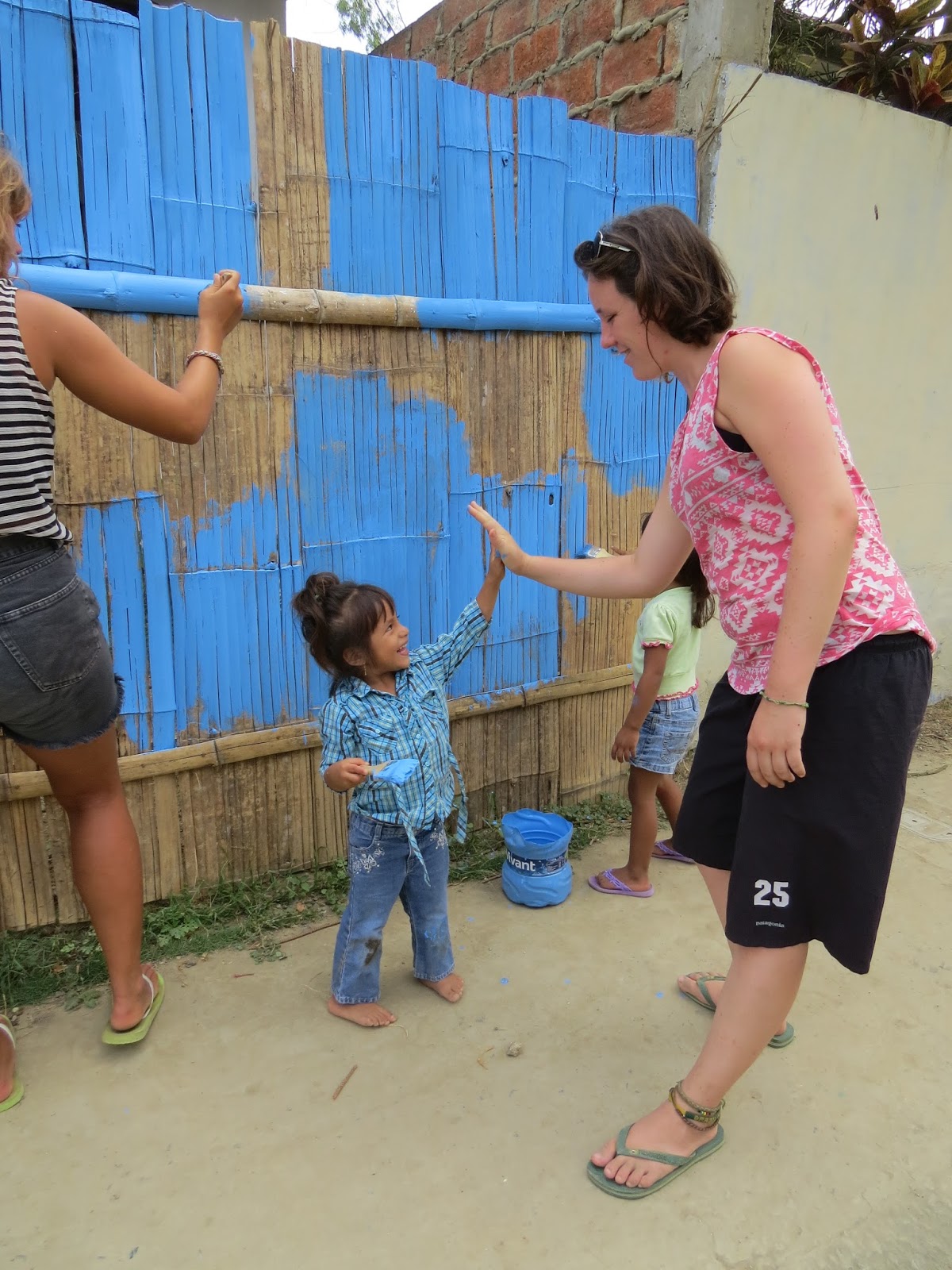 I was dubious at first. The fence was very dirty and we didn't wash it, so I though the paint might peel right off. I was also concerned when the kids started painting the poles of the street signs and making blue hand prints on the walls of the house.

I soon realized that, like many things in Ecuador, a successful outcome would emerge from the chaos. The kids worked hard and took their job seriously. Within an hour, the fence had been transformed into a vertical ocean. 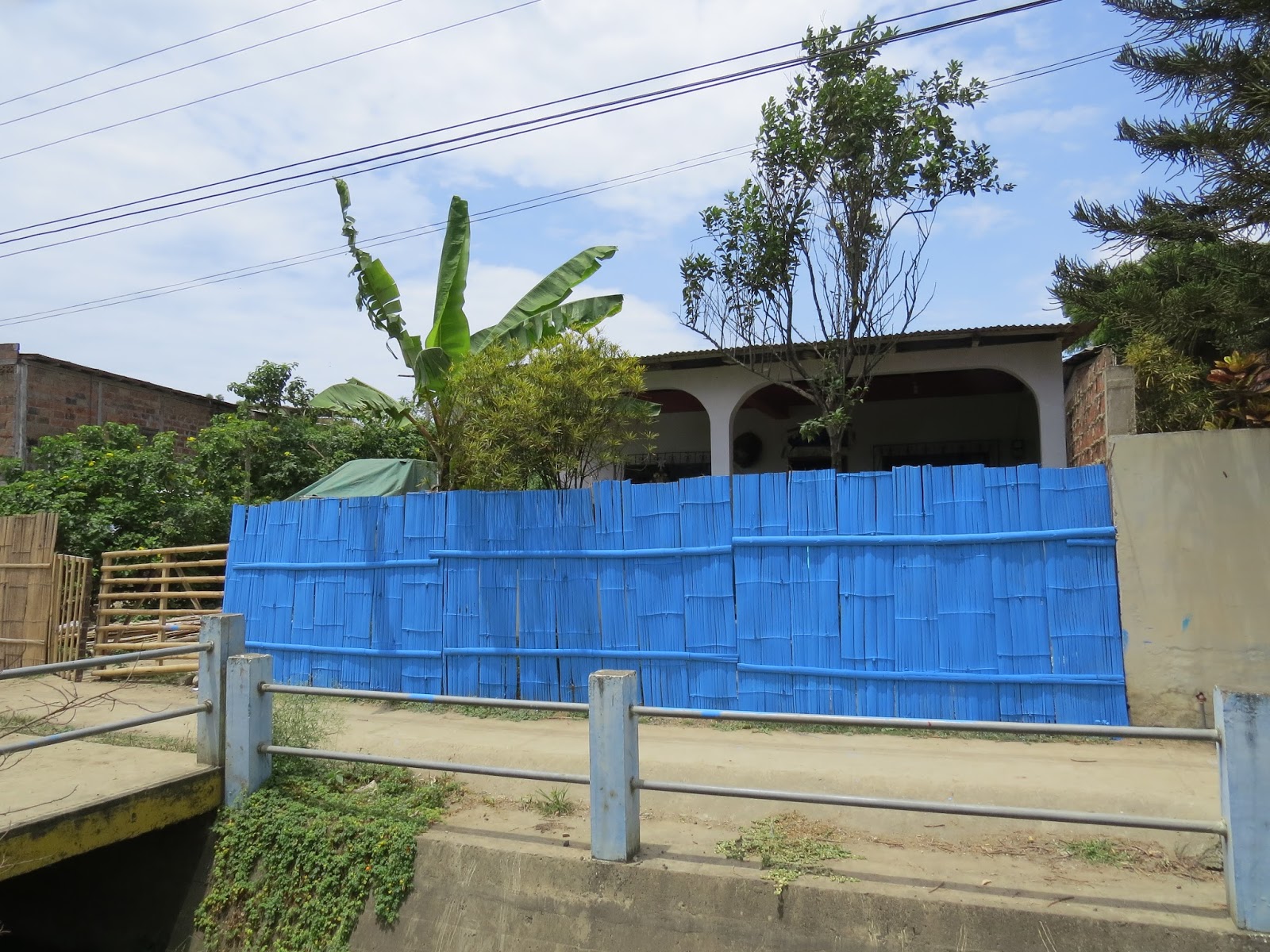 In a few weeks, we'll get the kids back out here with paint to create a colorful underwater mural!

After the painting was all done, we still had an hour left, and the kids were certainly not going home early. We dragged out wooden stools and low tables onto our concrete front porch. Within minutes, the porch went from hammock napping territory to kindergarten craft center.

When the kids got tired of drawing sea creatures, we made puzzles by cutting up pages from teen fashion magazines and letting the kids piece them back together.

I thought the magazine-puzzle idea was ingenious, but I was also flabbergasted at the choice of magazine. The little girls would beg us to make puzzles from the prettiest models, and the boys wanted muscular, tattooed men.

In our modern world of photoshopped models and makeup and eating disorders, I believe we should set an example of healthy realistic bodies, especially to young children. Instead we were promoting the worst kind of unrealistic body image. I wish we could have promoted the ocean instead -- that is the goal of EcoClub, after all.


When I asked Caro (the head of EcoClub and our mentor as Equilibrio Azul) about the magazines, she told me the fashion magazines were the only ones available. I thought of the surplus of old National Geographics in the United States: dusty stacks in the basement, unwanted copies in the recycling bin, ten-cent issues for sale at yard sales.


I want to start a campaign to collect and mail those unwanted National Geographics to Puerto Lopez so the kids of EcoClub will fill their minds with inspiring photos of nature instead of unrealistic images of made-up supermodels. Who's in?