On Saturday I visited the lab of Paul Huxley, a PhD student at Imperial College in London. 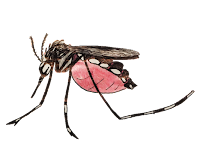 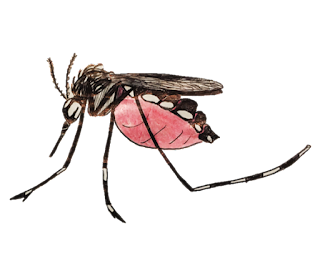 Paul showed me his laboratory, a refrigerated white room under the glare of florescent light. In this work, good lighting and temperature control are essential.

The room was lined with metal racks. One side held shallow plastic trays of water, where mosquito larvae squiggled at the surface. The far side held racks of test tubes, each containing a single pupa or adult mosquito.

A great sign: a string of giant, hand-crafted mosquitoes adorned the wall. Y'all know I'm a sucker for art depicting organisms typically forsaken as merely pathogens or vectors of disease.

This laboratory studies one species in particular, Aedes aegypti. Last week in my infectious disease agents class, my professor, Dr. Jo Lines, unceremoniously referred to A. aegypti as "the pigeon, the rat, the cockroach of mosquitoes!" These adaptive insects thrive in cities across the tropics and sub-tropics. "The more we build up urban environments, the better they do," Dr. Lines summarized.

Paul stresses that the relationship isn't quite this straightforward. (Very little in ecology ever is.) Urbanization can boost populations of this mosquito, he agrees, but improved living conditions that sometimes come with urban development can also have the opposite effect, reducing mosquito populations and disease transmission.

Growing populations of this insect are not great news for humans. Aedes aegypti's common name is the "yellow fever mosquito," a title earned because it serves as the vector for several potentially-deadly viruses including dengue, chikungunya, Zika, Mayaro and, of course, yellow fever.

Naturally, Aedes aegypti garner a lot of scientific attention. Lots of researchers have asked whether climate change will increase their range or boost their populations, potentially causing a lot of human illness. People have created detailed models to predict the effect of temperature on these blood-suckers.

But, says Paul Huxley, temperature isn't the only variable at stake. Food is on the table, too. Aedes aegypti larvae munch on microbial detritus in stagnant freshwater—anything from natural puddles to upside-down tires—and this food source could become more abundant as temperatures rise and microbial metabolisms speed up.

That's just one possible scenario. Paul wants to find out how temperature and nutrition affect the mosquito's success in terms of its growth, survival, body size, and reproduction—and how these individual traits affect overall fitness.

Paul's research is based on something called the Metabolic Theory of Ecology. According to this theory, the speed at which an animal uses energy—its metabolic rate—is the fundamental factor governing most of the patterns we see in biology. Across most species, traits such as body size and lifespan tend to scale predictably with metabolism. (As an example for the math-minded among you:  an animal's metabolic rate scales to the ¾ power of the animal's mass.)

Paul wants to know if Aedes aegypti follow this pattern. Do their traits scale with their metabolism, as the Metabolic Theory of Ecology predicts? If they do, scientists could use that relationship predict how A. aegypti populations may respond to shifts in temperature and food in different habitats around the world—a task that is becoming more important as a changing climate and adapting microbes make our world less predictable than ever.