They Call It the Spiny Forest

They call it the Spiny Forest, and even Dr. Seuss could not have dreamed a place like this.

This region is more accurately described as the Spiny Thicket because most of the vegetation is scrubby and short. Rainfall here is desperately scarce, averaging about 14 inches in a year, so the plants have evolved to conserve and store water.


But you won't find any of the typical desert plants in this forest. Over 95% of plant species here are endemic, meaning they grow nowhere else in the world. That's especially impressive when you consider that the Spiny Forest ecosystem exists only on the southwestern tip of Madagascar.

And it's especially concerning when you learn that barely any Spiny Forest is left. The pressures of cattle and goats, plus logging for charcoal, has nearly caused the extinction of an entire ecosystem. Only 3% of remaining Spiny Forest vegetation is protected. I visited two tiny protected areas, Reniala Nature Reserve and Parc Mosa, located near the Mangily Village and Ifaty Beach. Reniala, the larger of the two parks, protects fewer than 60 hectares of land.


The landscape here is dominated by four strange trees. The first one I notice is the octopus tree, Didierea madagascariensis. The name in Malagasy is sono, pronounded "shoo-noo." Its entire subfamily, Didiereoideae, is endemic to Madagascar.

The second tree to catch my eye was silver thicket, Euphorbia stenoclada. This spiky, fleshy, leafless, dusty-green plant looks like a torture device. Our guide called it "zebu food" because, believe it or not, it's a major food item for the humped cattle that call the Spiny Forest home. The actual name is Malagasy is famata.

The third plant to capture my attention was the elephant's foot, Pachypodium geayi, or vontake in Malagasy.


And then there are the baobabs, the fantastical beings that drew me to the Spiny Forest. Strangely enough, these giant, bottle-shaped trees belong to Malvaceae, the mallow family. There are nine species of baobab in the world: two in Africa, one in Australia, and six on Madagascar. The species I encountered here in Mangily was the fony baobab, Adansonia rubrostipa.

Many other plants of the Spiny Forest deserve mention, but I won't bore you with a complete botanical catalog. I'll just point out two more species that gave me pause.

Parc Mosa and Reniala Nature Reserve are essentially an island of Spiny Forest within a sea of bare sand, goat-grazed rubble, and the packed dirt of villages. It's not large enough to support the megafauna, like diurnal lemurs, but it does provide habitat for many gorgeous reptiles, birds and invertebrates.


Here is an excerpt from my journal that I hope will convey some of the magic of this place:

My favorite moment of the early-morning bird tour through Parc Mosa was around 8:00 am. It started to rain. I had heard that it never rains here in the Spiny Forest, but it does, in the most peculiar way. Fat, heavy drops spatter down from a single puffy cloud way overhead, gray in the center and white on the fringes. The blue sky and hot sun are present during the rain. You might even be standing in direct sunlight as the rain hits you, if there is a breeze to blow the raindrops sideways in their descent.

We had one main guide and two spotters, all teenaged sons of Mosa, the park's curmudgeonly owner. Apparently, a spotter on the far side of the park spotted something cool and communicated that to his brother, our guide (through a whistle, whoop, or text message? I couldn't tell.) Our guide started speed walking and motioning us to follow him. He soon broke into a run, his flip-flops smacking the red sand, bone dry but for a few spots where the raindrops has struck. I started running after him. We twisted and turned on the network of trails--more like openings widened by goat traffic--to avoid running into spiny octopus trees or getting tangled in Euphorbia "zebu food." I was out of breath, scratched on my bare arms, clinging to my camera in one hand (to keep it from swinging) and my wide-brimmed straw hat in the other (to keep it from flying off). The rain picked up. While running, I clutched the camera to my chest and my straw hat over it to provide temporary protection from the water. Looking back over my shoulder, I could see that my friends had fallen behind or decided not to run. I wasn't worried they would get lost, because there was another guide back there with them, but I hoped they wouldn't feel like I'd left them behind. As we kept running for minutes and my throat burned, it crossed my mind that this might be a rehearsed trick at the end of every bird walk to earn tips from awed and exhausted tourists. If so, the thrill of the chase and the smoothness of the execution were worth it. (Yes, I tipped extra.)

Finally, we arrived at the bird, of which I'd started to doubt the existence. It was a subdesert mesite, one of my two target dream-birds I'd sketched the week before in my journal with Josia. The bird was brown with a long, fray-tipped tail. It hunched uneasily on the branch of a Euphorb tree, raindrops beading on its back. I prayed that my friends would get here in time to see it. They did. The mesite hung around until everyone got a chance for a photo, and then it hopped away into the brambles. Maybe it was in on the tip-earning scheme, too.


If there is no place like home, there is really no place like the home of baobabs and elephant's feet, octopus trees and silver thicket. This ancient, patient, razor-sharp landscape has been the single most alien ecosystem I've encountered on my Watson year. I didn't have the time or tools to meet the microbes of the Spiny Forest, but I am certain that an equally interesting ecosystem thrives here at the bacterial scale.

Think about this. If you are astounded by the number of human generations a thousand-year-old tree has witnessed (as I am), just imagine the number of microbial generations---and the amount of evolution---that have come and gone amid the velvet-ball fruits and flaky-red bark of a single baobab. 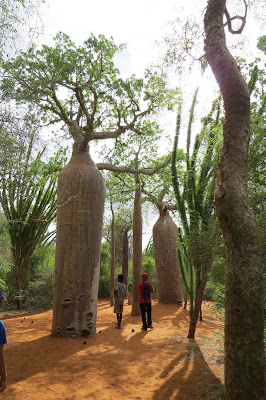