If I told you I spent eight days in the forest capturing nocturnal marsupials, where would you think I was working? Probably Australia, the land of marsupials, where eutherian mammals (those that use placentas to transfer nutrients to a growing fetus) never arrived. But Australia is not the only place marsupials call home.


Brazil is home to many marsupial species, and I got to meet two of them as a volunteer with Cyntia Cavalcante Santos's small-mammal-trapping team. Cyntia is finishing data collection for her PhD. Her field work consists of spending a week at a time in the dry, tick-infested forests and sunny, cattle-infested pastures near Bonito, where the native ecosystem is a combination of Mata Atlantica (Atlantic forest) and Cerrado (tropical savannah).

Her plan is to complete six transects in each of eighteen locations, and she walks every transect four times: once to set out traps, and three times to check what hapless little mammals were attracted by the smell of juicy fruit overnight. She wakes at four in the morning and starts bushwhacking before sunrise. Did I mention she also walks a kilometer along each transect to collect scat and photograph tracks in the dirt?

I was lucky to accompany Cyntia on her fifteenth transect, along with two first-year college students from Dourados, Mariane and Gabriel. We walked the transects and set up two kinds of live trap: open-mesh Tomahawks on the ground, and folding metal Shermans on tree branches. We baited each trap with a fragrant chunk of pineapple or banana, then left them in place overnight in hopes that a nocturnal mammal would be lured inside.


Cyntia's goal is to understand how human land-use is affecting the habitats and ranges of mammals in the Cerrado. Here, native vegetation is being converted to cattle pasture at an alarming rate. I've seen it happen before my eyes. Primary forest is logged and burned. The remaining wood is gathered into piles to continue drying, so it can be burned later. The bare red dirt is plowed and planted with braquiária (Brachiaria brizantha), an African grass used for cattle pasture.

After the ground is plowed, ranchers create uniform berms of dirt to prevent rain from eroding their land downhill into the creeks and rivers. These raised stripes can be seen years later, once grass has filled in the pasture. This tactic can be viewed as dedication to "the environment" because is preserves topsoil and reduces sediment pollution in rivers, but retaining soil is not the same as retaining species. Compared to primary forest, the difference is slim between a pasture, a pasture with berms, and an asphalt parking lot -- at least in terms of biodiversity. That's how it seems to me, anyway. Cyntia's research will tell us how pastures and cornfields really compare to forest.


We didn't capture any mammals our first day, in the pasture or the forest, but there was still much to be learned from the landscape, and many challenges to overcome.

One morning, I was renewing the fruit-bait in the traps by myself when I noticed that a swarm of black ants had taken over one of the Shermans. The ants moved slowly, almost leisurely, along the branch. They were huge, but not the gargantuan size of a bullet ant. Their black color was matte, not shiny, and their limbs seemed substantial, as if the ants were molded plastic instead of chitin exoskeleton. Each of their faces was covered by a flat shield, from under which glowed a ruby-red light. If ever I have encountered alien robots, these were them.


I watched, entranced. When two ants encountered one another, they paused for an intimate greeting of entwined antennae. I assumed the ants had been attracted by fruit, but when I finally looked inside the trap, the pineapple chunk was intact and abandoned. The ants didn't like pineapple. So why were they here?


Upon closer inspection, I realized that many of the ants were intently chewing the rubber bands I'd used to attach the Sherman trap to its branch. "Can they digest rubber?" I wondered. The ants reminded me of municipal road-workers, called out after a windstorm to rapidly clear the streets of downed trees. Later, Cyntia told me my analogy was spot-on. These ants "own" specific trees in the forest, and they guard them jealously from epiphytes, bee hives, leaf-eating insects and, apparently, small-mammal traps. The ants were actively removing our trap.

I marvelled at their intelligence. Surely they had never encountered rubber bands or metal before -- how did they know to focus on chewing the rubber bands? One patrol ant must have encountered the out-of-place object and called for backup. I imagine the crew biting on all parts of the trap and scratching their antennae about what to do. Finally one ant bites the rubber and finds it softer. How did that ant communicate its discovery to the rest? Did they argue before they settled on the band-chewing plan? How did they organize into band-chewers and sentries? What messages do they send through entwined antennae, invisible pheromones, or vibrations?

In my excitement to photograph the ants, I accidently bumped into the trap. I jumped back, expecting the ants to swarm with speed and anger, but they did the opposite. They became absolutely stationary. Now, the illuson that they were plastic ant toys became inescapable. I waited for them to resume their walking, greeting, and chewing, but after five minutes I gave up and walked away from the red-eyed robots, frozen in place as if time itself had stopped.

Unfortunately for me, time had not stopped, and I had to run to finish baiting the rest of my traps! 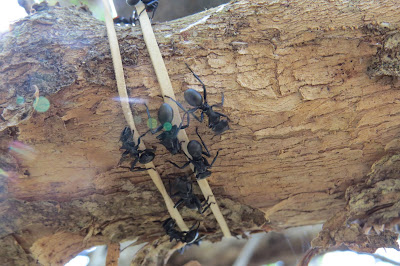 Another highlight of the trapping project was getting to meet the people whose land we were surveying. As I explained in my recent post, Vale do Bugio: Tourism as a Tool to Protect Private Ecosystems, most Brazilian land outside of the Amazon is private. That can be tricky for researchers who seek to understand ecosystem-wide phenomena. It means that mammalogists must be both expert scientists and expert socializers.

Cyntia began each day by greeting the landowners, explaining her project, offering a glossy Wildlife Conservation Society magazine about Cerrado research, and making small talk about just about everything.

We spent over an hour meeting Seu Claudio, an elderly farmer whose five children have grown and moved away. His brown skin wrinkled around his eyes, his arms were strong and lean, and his smile alternated between teeth and gaps. His eyes spilled tears when he told us that his wife, Donna Maria Rosa, had passed away one year and five months before. He pointed out the blackboard on his front porch where he had written a voltage equation for the electric fence and a note to his late wife: "PARABENS!! PELO SEU DIA DAS MAES," happy Mother's Day. His loneliness, loss and love were plain to feel.

Claudio accompanied us on our hot, dusty hike up his thorny mountain to set out the traps. The next day, I noticed that his blackboard had been updated to include our four names at the bottom: "Gabriel - Nina - Dr. Cyntia - Mariane." He filled us an enormous bag with lemons from his garden and thanked us for the magazine, which he'd read cover-to-cover the night before. 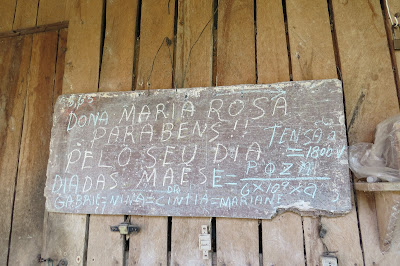 Making social connections with private landowners can be a burden to scientists in Brazil, drawing down precious hours for fieldwork and data analysis. But I also see an enormous value in these relationships forged between academics and farmers. Conversations foster compassion and curiosity. Maybe these human connections will help keep the country from polarizing. Production, subsistence and livelihood need not be antagonists of biodiversity, conservation and science. All humans need both food and a functioning biosphere to survive.

Over the next week, we managed to capture six marsupials of two species, from both forest and pasture landscapes. One was the catita (gray short-tailed opossum, Monodelphis domestica).


I was amazed at how they sniffed, explored, and observed their surroundings just like a pet mouse or a human. I've never spent much time around small mammals, preferring reptiles, fish, and birds, but it was heart-warming to notice the similarities between me and my cousins.

As a tangent, check out the Wikipedia page for this species and see if you recognize the photos! When I checked Wikipedia to find this species's English name, I realized the page had no photo. Always a joy to contribute to the world of free-use online media!


Small mammals aren't Cyntia's only interest. She wants to know how all mammals are using Cerrado landscapes, but those pesky jaguar and peccary don't fit inside Tomahawks, so Cyntia uses a different kind of trap: cameras.

After a week of small-mammal trapping, I volunteered to stay behind with a soon-to-be-Master's-student, Renata. Along with Almir, the university driver, we collected fifteen motion-triggered cameras set out a month earlier. As you might expect, half the cameras faced cornfields and pastures, while the other half were nestled among native acuri palms and bamboo stands.

It was a marathon day, and we only paused for soupy tuna sandwiches at three in the afternoon. The sun was setting, we had fourteen cameras in the truck, and we were feeling good, until...

"What's that buzzing?" asked Renata as we got near the fifteenth camera. Yup, small wasps called marimbondas had built a hive in the camera box. Renata tried whacking the box to get the wasps to leave, but that trick only works with ants and mice. These wasps got angry. They swarmed out and stung Renata on the knuckle.

Plan B: get Almir! I remembered back to my high-school bee-keeping days, when we used smoke to calm the bees before stealing their honey. What could we use to make smoke? I suggested paper, but Almir had bigger ideas. He found a can of air freshener in the truck, and he improvised a blow-torch by lighting the scented aerosol on fire with a cigarette lighter.

He didn't calm the wasps with smoke. He incinerated them with flames.


It did the trick. Once enough wasps were vaporized, we stuffed the camera in a feed-sack and tied a tight knot. Back at the lab, Renata threw the whole buzzing mess in the freezer. An hour later, we opened it up to find sluggish (but very alive) wasps and a papery apartment complex filled with larvae and honey.


As if the poor camera had not been through enough, we doused the hive in insecticide and pried out the hexagonal architecture with a butter knife. Finally, the camera was liberated. We expect many photos of... wasps. 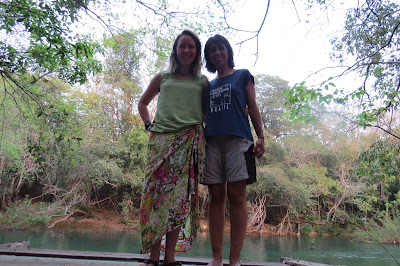 Best of luck on your doctorate, Cyntia! Thanks for including me in your science!