Humans as Texts: Conservationists in Three Nations of the West

On Semester in the West, the Whitman College field program I completed in autumn 2016, our texts were not books, but the dozens of speakers who gave us their time and wisdom.

I once thought the West was contained within one country, the United States. And I thought a conservationist was someone who tried to save animals from extinction. Below are brief biographies of three of our speakers who challenged those ideas.

They are citizens of Mexico, the Diné (Navajo) Nation, and the Nimiipuu (Nez Perce) Nation, all of which compose the West. They fight to conserve things that matter, from language to habitat to the body parts of planet Earth. I hope they inspire you, as they did me. They remind us that there is an enormous diversity of ways to be good and be yourself.

Cross-posted from the Semester in the West blog. 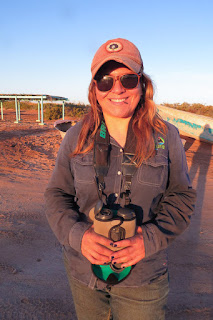 “You’re going to have to swim!” These were the words of Alejandra “Alex” Calvo-Fonesca when our boat ran out of gas in Ciénega de Santa Clara, a vast marsh of recycled irrigation water in Sonora, México. Her mischievous smile told us she was joking, and she quickly produced a paddle with which to rescue us. Wildlife Survey Coordinator for ProNatura, Alex brims with enthusiasm for her job. “It’s like school,” she says. “I’m always learning. Sometimes I have a theory, and my coworkers know what’s going on in the place. We correlate the two and learn. That’s what I love.” When Alex majored in aquaculture at Universidad Autónoma de Guadalajara, she planned to design ornamental aquaria. Instead, she began working at a shrimp farm and surveying birds for ProNatura, a nonprofit that has been collaborating with governments and local communities to restore the Colorado River Delta since 1990. Now in her ninth year, Alex has risen from fieldwork to the office. “I knew nothing about biology when I started, but they provided a workshop,” Alex explains. She conducted vegetation and wildlife surveys, learning to identify marsh birds such as sora, least bittern, and the endangered Yuma clapper-rail by ear. Alex’s curiosity has earned her a vast and growing base of knowledge. She can point out native cattails and introduced cane, bird species in English and Spanish, and even the way out of a maze-like marsh when your boat runs out of gas. 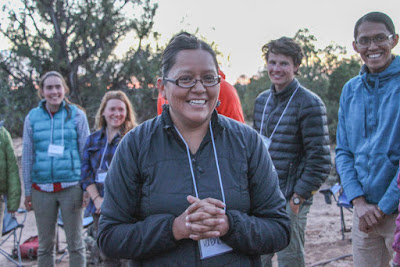 Valencia Edgewater is chíshí diné, of the Chiricahua Apache clan, from the Black Mesa region of the Navajo Nation. She teaches community-based Navajo language and culture classes near her home in Hardrock. In addition, she drives her own vehicle for a family-owned, non-emergency medical transportation company. After earning a master’s degree in bilingual bicultural education from Northern Arizona University, Valencia started using her training to pass on the Navajo language, which she began learning in childhood from her grandmother, to community members and visitors. Valencia teaches through immersion, speaking entirely in Navajo and focusing on ways of thought. Through gestures, images, and the natural environment, Valencia invites her students to learn. She begins a lesson with the sun, orienting her students to the cardinal directions of sunrise, sun passage, sunset, and the North Star. After only an hour of instruction, novice students can point out the directions of the sacred mountains, introduce themselves in Navajo, and ask others to do the same. As a mother of two boys, Valencia is committed to imparting Navajo language and culture to the next generation. 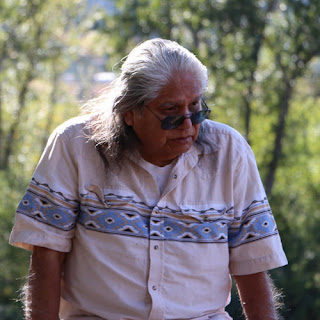 “Son, do something for your people.” These were the words of advice left to Allen Pinkham, or Paaxat Higatin in the Nez Perce language, by his father. Pinkham is a Nimiipuu elder who has accomplished a great deal for his people, a vast family that includes salmon, deer, eagles, grizzly bears, wolves and insects. “Everything you see on this earth is your people,” Pinkham told us. “We have red blood just like them.” This concept, one of Pinkham’s “mythological truths,” was the basis for his 1999 book on Nez Perce fishing culture, Salmon and His People. Last year, Pinkham published a second book, Lewis and Clark Among the Nez Perce: Strangers in the land of Nimiipuu, to recount the famed explorers’ journey from his people’s perspective. As former Chairman of his tribal council, Pinkham fought to enact treaty rights, bring fish ladders to local hydroelectric dams, and reintroduce coho and fall chinook salmon to the Clearwater River. While he has won many battles as leader and activist, Pinkham’s greatest gift is his ability to weave together history and future through story-telling. He invited us to visualize our bodies as part of the earth, each finger representing a species. “When you lose the passenger pigeon, you lose your little finger,” he explained. Because we abuse ecosystems, we’re at risk of losing bison, salmon, and thousands of others. Wounded, fingerless hands seared across our imaginations. “The earth is squirming,” Pinkham concluded. “How much longer until we say, no more body parts lost?”