My dad and I took off the day after Thanksgiving for our own Green Friday adventure to Lizard Hill, a growing-up Christmas tree farm on the Kitsap Peninsula. 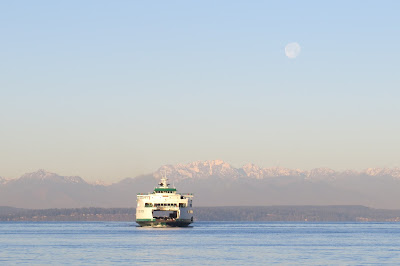 The moon was out, and the sky so clear we could see the snow-lined crevasses on the Olympics and the Cascades. 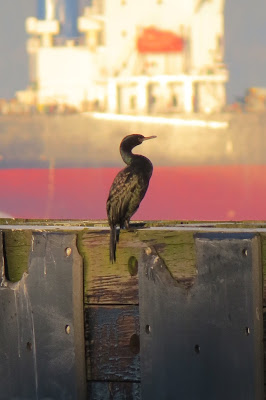 Pelagic cormorants (shown) and double-crested cormorants were abundant on pilings. 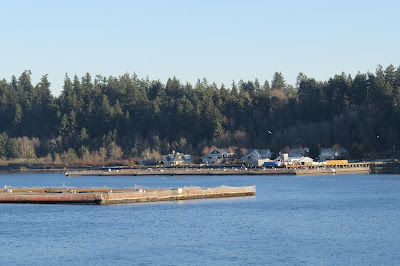 I had no idea there was an Atlantic salmon fish-farm named American Gold Seafood on Bainbridge Island! The gulls, however, are well aware. 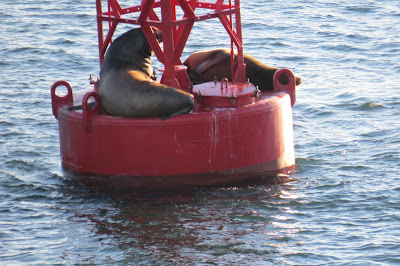 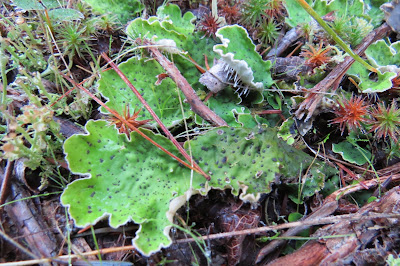 The moist, exposed dirt of Lizard Hill's old roads is the perfect substrate for lichens, such as this freckle pelt (Peltigera britannica). 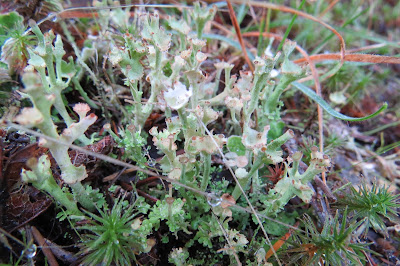 This cup lichen is one of numerous Cladonia species. 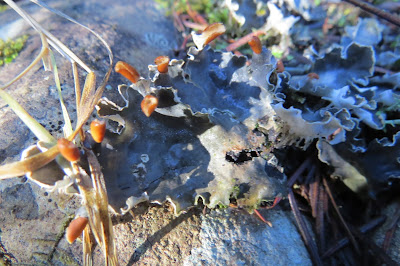 Frog pelt lichen (Peltigera neopolydactyla)?? I'm having fun trying to identify these lichens. The best reference I've found for pelt lichens in the Pacific Northwest is Jason Hollinger's webpage -- if you're ever in the woods with a pelt lichen quandary, I suggest you check it out! 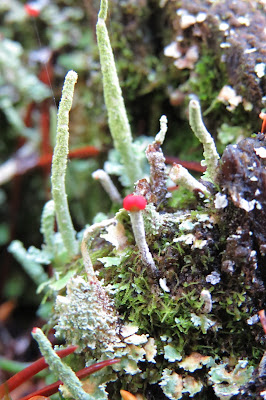 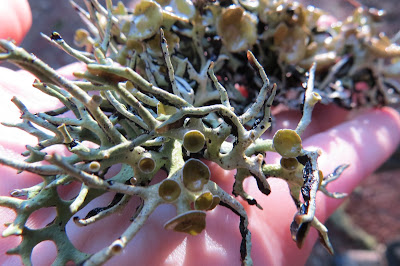 Forking bone lichen (Hypogymnia inactiva). We were lucky to find this on a twig, blown down from high in the trees. I've never seen a lichen like this before! 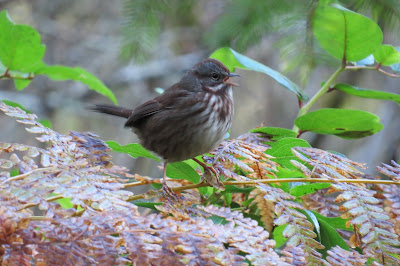 I saw several song sparrows and heard from many more. This one defended his territory valiantly against two small, chipping Pacific wrens. 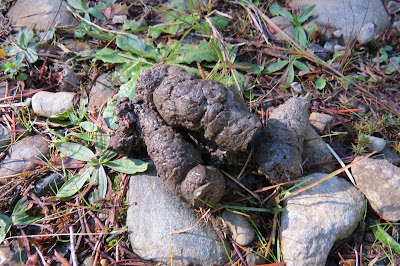 While my dad and I were away from our car, a sly coyote left us this present. Best of all, my dad stepped in it a few minutes later! 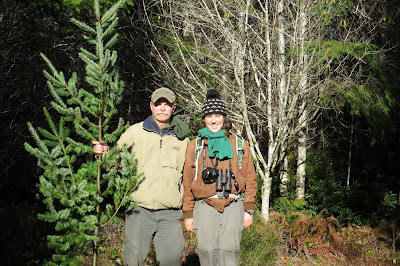 We found a wind-felled Douglas fir (Pseudotsuga menziesii) in the road and decided to adopt her as our Christmas tree. 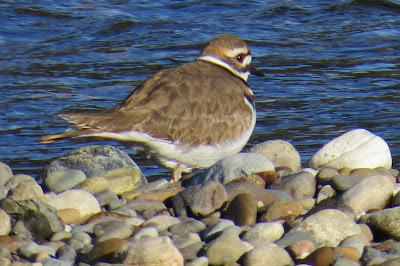 On our way home, we stopped at Belfair State Park to check out the shoreline. We found lots of killdeers making their two-note keen. 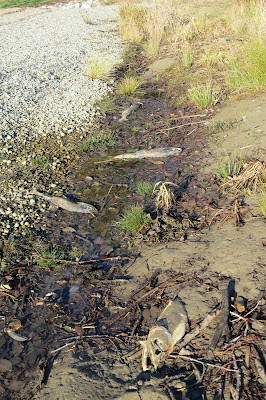 The river was filled with decaying salmon carcasses and one live individual who looked not long for this world. 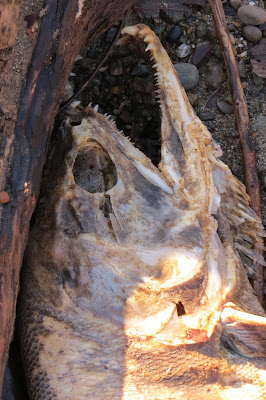 The salmon attracted a family of bald eagles and countless glaucous-winged gulls. 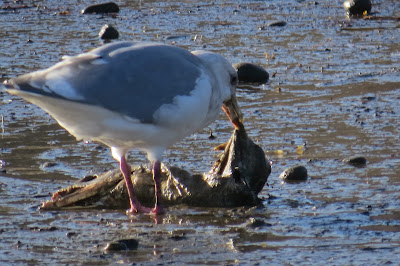 It was a seaside feast! 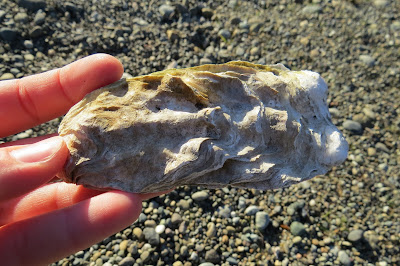 The beach was signed for oyster harvesting, but we found only shells. Most marine invertebrates use calcium carbonate (also called calcite) to build their shells and skeletons, but the crystal structure of calcite varies. Crustaceans (crabs, lobsters, and barnacles) use low-magnesium calcite. Corals and molluscs (like this oyster) use aragonite, which is twice as soluble in water than low-magnesium calcite. That's why scientists are worried that corals and molluscs are at heightened risk of dissolving as oceans acidify. But echinoderms (sea stars, sea cucumbers, sea urchins and sand dollars) build their skeletons out of high-magnesium calcite, which is THIRTY times as soluble as low-magnesium calcite! So,  if you're a sea star... drink an extra glass of milk a day? 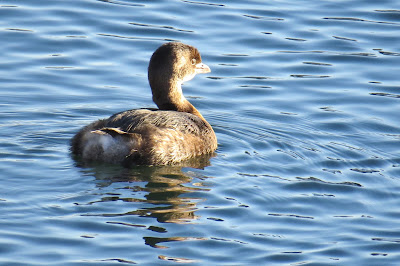 A pied-billed grebe was hanging out at the Bremerton Ferry Terminal. 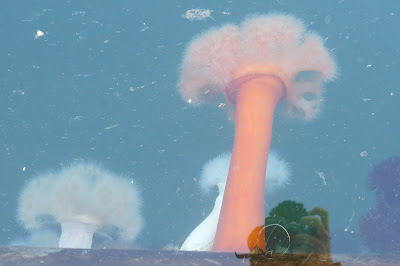 These huge plumose sea anemones (genus Metridium) remind me of cauliflower. (Can you find the photographer?) 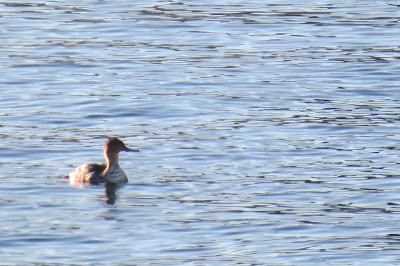 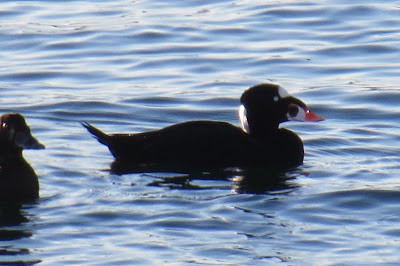 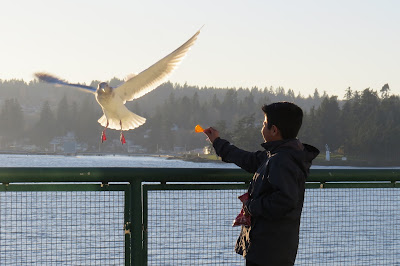 On the ferry, this brave boy made friends with a hungry glaucous-winged gull. 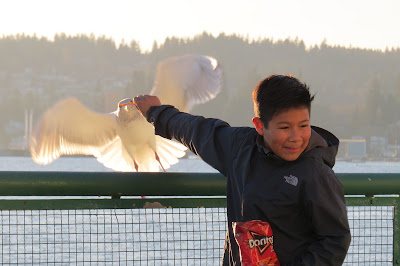 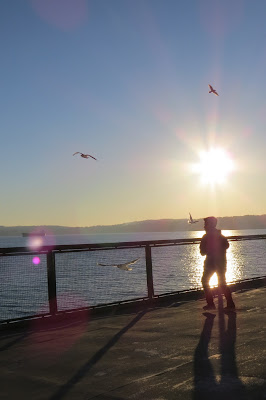 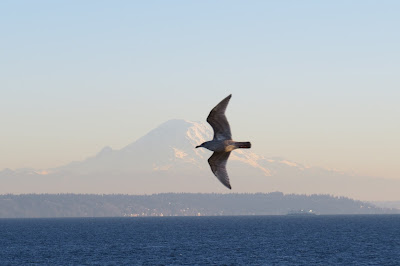 Mount Rainier emerged to welcome us back to Seattle as the sun set behind the Olympics. Thanks, Dad, for the awesome Green Friday adventure!