The Breath of Lichens: Day Four on the Alaska Road Trip

AMAZING morning at Liard River Hotsprings Provinicial Park! We got up early to bird along the boardwalk through a steamy, hotspring-fed swamp. A pair of solitary sandpipers pecked in the sloopy, carbonate-rich mud, a red squirrel chattered from the top of a stunted spruce, and cedar waxwings flashed their yellow tails. Branchless horsetails stood sentry. In my mind, we traveled back in time a million years to the land of tropical dinosaur bogs (that’s what the earth used to be like, right?) I may have spotted a pterodactyl overhead.


The hotsprings were dammed to provide two pools, the really hot Alpha and pleasantly warm Beta. Jane and I dog-paddle-floated through the increasingly narrow channel stacked high on either side with damp earth and dewy spider webs, ducking under logs, to discover the cold spring that fed into the Beta pool and contributed to the cold-feet-hot-ankles thermocline. As I looked straight up from my gravel-bottomed puddle, hearing the drip of cold water and smelling the breath of lichens, I could have been at the edge of the world.

When we returned to the populated pools, we met a family of four from Fairbanks embarking on a road-trip marathon to Minneapolis and back. I joined the younger family members as they attempted to scale the slippery log structure and flop gracefully into the sulfurous water. (Grace was not achieved.) Their father taught us how to differentiate between stately, taller white spruce and scraggly, shorter black spruce, though I’ve yet to master the technique. He pointed out paper birch and aspen, but we have yet to pin down cottonwoods, balsams, or poplars. Oh trees! The family recommended a joint called Fast Eddy’s for when we get to Tok, Alaska. Seems like a way off yet. 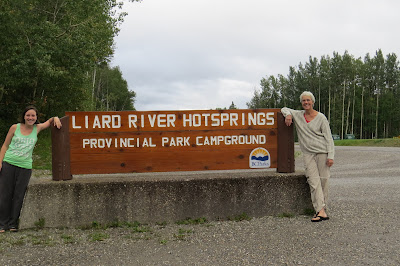 Our progress was slowed immediately by a herd of bison crossing the road. Probably the same ones we saw last night in the fog.


We stopped for a “second breakfast” of famous bison burger at Coal River Lodge and RV.

“Is it real bison?” I asked our waitress (just to be sure!) She laughed too hard to respond.

Finally, she answered, “I buy the whole bison once a year in Fort St. John, get ‘er butchered, and make the burgers to serve up here.” It was mighty delicious on a sesame-seed bun.


Our next birding excursion to Lucky Lake, outside the town of Watson Lake, was prompted by the Milepost’s note to look for boreal chickadees. (When a general guidebook mentions a bird species, you know it’s worth checking out!) Indeed, we found flocks of the buzzy little chickadees, swinging upside down from pine twigs and gleaning insects from spruce needles.


Our path from Lucky Lake took us down to the Liard River, where we admired the jagged, tipped-on-edge geology and watched a spotted sandpiper bob its tail.

Watson Lake had an awesome Signpost Forest where we took snapshots with the best signs. We left town with cold root beer, Canadian cash, a full tank of gas, and ice for the cooler.


My favorite side-trip was the short boardwalk over Rancheria Falls, where I’m certain fairies lived among the club mosses and lichens. A Swainson’s thrush eyed us from deep in the underbrush.

Our day ended with liver and onions for me and meat-sauce spaghetti for Jane.

The restaurant included a free wildlife gallery with expertly taxidermied game. I could not believe the size of a bull moose!


On the plaque under the moose diorama were written these words:

"A simple act of survival, played out each day in the wilderness. Not victim and villain, but components in nature, and for all, even the mighty and the clever, there will be a last morning."

As a student of ecology, these words rang true, and on the day before the birthday of my grandfather (who would have been 92 tomorrow), they brought tears to my eyes.

It was our first night in Yukon Territory, and we must be getting pretty far north… The sun was still bright in the sky by 10:30 pm when we collapsed on our beds. 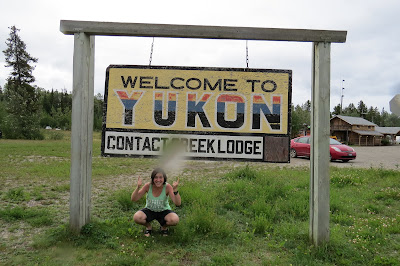