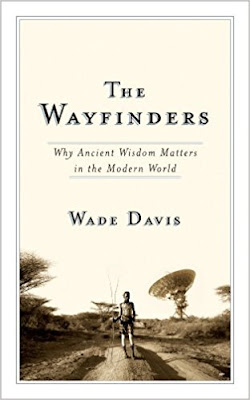 Imagine a warm fire on the hearth of a dark wooden room, its flames throwing orange light onto shelves of antique books. We sink into a circle of plush red armchairs, swirling mugs of tea, preparing to discuss literature. When we think “book club,” this is the scene that comes to mind.

Now imagine the blue-white glow of your laptop, pixelated faces coming into focus over webcams, unfamiliar voices through headphones, a chat box for comments. This is what the Planetary Health Alliance’s inaugural book club actually looked like.

A digital meeting might not sound like the romantic book clubs of yore, but we—Federico and Nina—couldn’t have been happier to co-lead a discussion of this month’s book, The Wayfinders by Wade Davis, with Planetary Health Alliance members Laura Feldman, Sabine Gabrysch, Perri Sheinbaum and Erika Veidis first thing this morning.

To begin, we each read a quote that struck us.

Federico led off. “The myriad of cultures of the world are not failed attempts at modernity, let alone failed attempts to be us. They are unique expressions of the human imagination and heart, unique answers to a fundamental question: What does it mean to be human and alive?” (19).

We heard from Erika next. “Culture is not trivial. It is not decoration or artifice, the songs we sing or even the prayers we chant. It is a blanket of comfort that gives meaning to lives. It is a body of knowledge that allows the individual to make sense out of the infinite sensations of consciousness, to find meaning and order in a universe that ultimately has neither” (198).

As Laura said, this is a bold assertion, and powerful. Laura picked up the quote where it left off, continuing, “Culture is a body of laws and traditions, a moral and ethical code that insulates a people from the barbaric heart that history suggests lies just beneath the surface of all human societies and indeed all human beings” (198).

Nina added her own: “The point is not to suggest which perspective is right or wrong. Is the forest mere cellulose and board feet? Was it truly the domain of the spirits? Is a mountain a sacred place? Does a river really follow the ancestral path of an anaconda? Who is to say? Ultimately these are not the important questions. What matters is the potency of a belief, the manner in which conviction plays out in the day-to-day lives of a people, for in a very real sense this determines the ecological footprint of a culture, the impact that any society has on its environment” (122-123).

The strength of Western culture, Davis points out, is technology. We (and we say “we” because everyone in the book club identified with Western culture) are amazing scientific tinkerers. We put a (male) human on the moon, and we are now dreaming of conquering Mars. But we are lacking in other realms, and Davis points out that other cultures excel in our weak areas: sustainable use of resources, kinship, connection to land, spiritual generosity––what Laura summed up as, basically, “Planetary Health.” If the Planetary Health movement is an attempt to address Western culture’s weaknesses, does that make it inherently a practice of humility?

Lessons of humility can be found at our knowledge and experience margins, places that many indigenous and traditional peoples have already traveled. Davis writes of the Kogi, Arhuacos and Wiwa mamos, or priests, of the Sierra Nevada de Santa Marta in Colombia. These spiritual leaders call themselves the Elder Brothers of Mother Earth and other peoples the Younger Brothers. In 2004, amidst accelerating violence, a group of mamos issued an international declaration: “We invite all the Younger Brothers to be guardians of life. We affirm our promise to the Mother, and issue a call for solidarity and unity for all peoples and all nations” (147). It is humbling, Davis writes, to realize that the mamos are admonishing and advising us right now from their sacred mountain homeland, only a two-hour flight from Miami but a world away.

If the globally dominant thread of humankind had adopted the Aborigine lifeways of Dreamtime and Songlines instead of Western culture, writes Davis, we would not have put a man on the moon––but “we would not be contemplating today the consequences of industrial processes that by any scientific definition threaten the very life supports of the planet” (159). Would the Planetary Health movement be necessary if Western culture had not become dominant? Would the interaction and connection of traditional and indigenous groups with Mother Earth have prevented humanity from reaching our planetary boundaries?

We asked: how can the Planetary Health movement help address Western culture's weaknesses and improve scientific practices that often don’t acknowledge other sources of wisdom? What lessons could be learned from the Elder Brothers, and how could the Planetary Health Alliance better embrace a role of Younger Brother?

Federico explained that his institution, the University of British Columbia (UBC), acknowledges the indigenous peoples on whose land its property sits and collaborates with indigenous groups on research and community development. Although far from having achieved a complete reconciliation, UBC’s strategic plan includes the priority to “partner with Indigenous communities on and off campus to address the legacy of colonialism and to co-develop knowledge and relationships.” These first steps, part of a long path to promote a decolonized knowledge sharing, could serve as an inspiration to the Planetary Health movement.

We discussed the challenge of integrating indigenous knowledge into Western culture when our goal is not a homogeneous global culture, but the ongoing right for both Western and non-Western societies and cultures to flourish. How can we work to make transfers of knowledge ones of consent, respect and humility rather than ones of coercion, exploitation or tokenization?

Laura brought up the point that soundbites are not sufficient to convey a worldview; immersion is necessary to begin to grasp the depth and complexities present. How to immerse without encroaching on space, disrupting others, and using a lot of natural resources in travel? We were excited about one answer: the PHA has a full-time staff member who produces in-depth Planetary Health case studies from around the world and shares them on social media. Her combination of photography, story and presentation bring the viewer to a fuller understanding of the project and the worldview underlying it. We want the PHA to amplify the voices of the many cultures that are speaking. For example, if the PHA had existed in 2004, it could have used its power and prominence to spread the declaration of the Kogi, Arhuacos and Wiwa farther than the mamos could on their own.

After a nurturing discussion, and almost forgetting that we were separated by thousands of kilometers and only connected though our laptop screens, Erika invited us to conclude our hour in a simple yet wonderful way. “I’d just like to know,” she prompted, “what each of you envisions as an ideal world?”


Although we lacked luxurious red armchairs, and no fireplace was lit, we were committed to the goal of a book club: to exchange knowledge and create a new understanding of our lives by discussing an inspiring book. Accepting Erika’s invitation, we shared our vision of an ideal world. It would be one with more listening and more attentiveness to one another, a world in which our own Western culture takes up less space—our few languages, our profit values, our resource use and industrial methods—so that more space is available for everyone, human and nonhuman, to coexist in their own lifeways.