The Washington State Fish and Wildlife game warden pulled up next to the boat. "Whatcha fishing for?" he asked.

The game warden gave him a skeptical look, owing to the fact that Puget Sound bocaccio rockfish are an endangered species, totally off-limits to fishermen.

The canary rockfish, a lovely orange-creamsicle with scales, is listed as threatened in our area.

"Really," responded the game warden, not sure now whether he was kidding.

"Oh! and yelloweye," Nick finished, naming the third and final species of threatened rockfish in the Sound. [Click here to read about my impromptu beach necropsy of a dead yelloweye!]

The warden's eyes got wide as he began to believe Nick's story. I've caught the dumbest poachers in Washington State! he must have been thinking.

That's when Nick hit him with the final piece of information. "Oh, and we're with NOAA under a federal fisheries research permit."

Sadly, I was not present when this conversation took place. I've heard it retold by my NOAA Hollings Scholarship mentor, Nick, and I can only imagine that game warden's face. I was, however, lucky enough to accompany Nick and a band of dedicated local anglers on a similar mission.

Our goal was to obtain genetic samples of these three endangered species of rockfish to determine whether their south Puget Sound populations were distinct from their open coastal counterparts, as had been predicted when these populations were given endangered status, or if they moved and bred freely with coastal fishes.

The yelloweyes, canaries and bocaccios evaded us that day, but I proudly hauled up one brown rockfish, Sebastes auricuculatus.

The crew also caught two species of sculpin: a buffalo or Enophrys bison, shown here, and a red Irish lord or Hemilepidotus hemilepidotus, my personal favorite. I sure wish I could have magically shipped these guys back in time and space to Friday Harbor Labs, where my Puddle research crew could have studied the functional morphology of their jaw muscles!

But mostly we caught dogs. By which I mean sharks.

We recorded the size and sex of each dogfish we caught, even though we weren't there for shark research. The day's motto: "Don't waste an opportunity to take data because you'll never know when you might need it!" I lost count around fifty. Next time you're trying to sex a shark, just remember:


We also hooked some unexpected invertebrates...

We didn't accomplish our goal of sampling endangered rockfish genetics, but we had a great time out on the water. There's no such thing as a bad day spent boating on the Puget Sound, sandwiched between silver water and pewter sky. 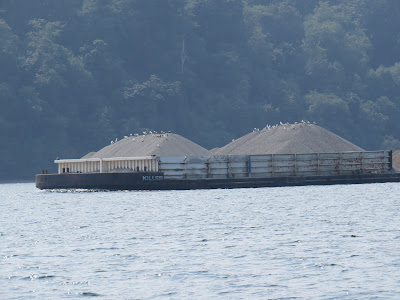 I think these gulls, hitching a leisurely ride on a barge of sand, would certainly agree.